What are the common mistakes when adding fractions?

In this ‘Ask the expert’, Emily Jones, Research Director at NFER, explores some common mistakes made by pupils when adding fractions and offers advice on how these misconceptions can be rectified.

NFER has spent much of the last year developing diagnostic guidance for NFER’s  new year 6 autumn and spring term tests. By analysing the responses given by a large, nationally representative sample of pupils, we have produced a collection of commentaries for most of the questions within the papers. These identify why pupils are making errors and also provide suggestions for next steps in teaching. An additional aspect of the diagnostic guidance is that it is specific to pupil attainment level, suggesting ways to improve the attainment of lower achieving pupils whilst also showing how more able pupils have responded.

Each individual question commentary provides an important insight into the pupils’ performance, but looking across questions within one strand of learning can offer even more evidence to enable teaching to address specific misconceptions or gaps in learning. The following questions demonstrate how learning progressions within the tests can be inferred.

This is a common misconception and demonstrates a lack of basic understanding of fractions. It might be useful for these pupils to work with concrete materials so that they can understand how fractions are part of the whole and that when adding fractions we are adding parts of the whole. For example, you could cut a piece of paper into sevenths and work with pupils to add varying sevenths together.

This is a more challenging question, which requires pupils to add fractions with different denominators together. Only 54% of pupils gave the correct answer: 5/6.

As with the previous question, a common error was adding together both the numerators and then the denominators to give the incorrect answer: 3/9. Pupils should have answered the question by first finding an equivalent fraction to: 2/3, a demand which confused pupils in both the lower and middle achieving groups. Few higher achieving pupils (2%) made this mistake.

It suggests pupils need greater familiarity and practice in finding the common denominator where one denominator is a multiple of the other. Again, working visually can be helpful – for instance, drawing rectangles on a piece of paper and showing these divided into thirds and sixths.

To enable the concept to be understood it is also important to keep it simple, for example initially using low denominators and fractions within a whole. Before asking pupils to add any fractions, can they identify which fraction in a pair is biggest?

Ensuring the foundations of finding common denominators are in place enables students to see this question as a two-step process: first converting 2/3 to 4/6, and then working out the addition. 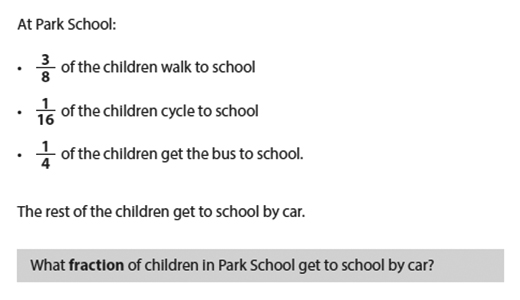 Beyond straightforward addition questions are problem solving questions. These require more abstract thinking; pupils need to read the information and deduce for themselves that they will need to use the strategies learned from adding fractions to find the solution.

In the question above, pupils are required to solve a problem set in context by converting the fractions so that they have a common denominator and adding them together. Two marks are available for the correct answer, with one mark also awarded where a complete and correct method is shown but arithmetic errors mean the final answer is incorrect. Unsurprisingly, the question was very difficult for the lower achieving pupils and very few gained a mark. Middle achieving pupils also struggled with approximately 40% scoring at least one mark.

Higher achieving pupils, however, performed well with nearly 90% gaining at least one mark. These pupils were more likely to attempt a conversion to find a common denominator, which then enabled them to calculate the sum of the fractions: 11/16. From here, they needed to work out the left over proportion of children travelling by car: 5/16.

Analysis of multi-step problem solving questions often reveals issues with pupils’ approaches beyond incorrect application of knowledge. In this case it highlighted pupils’ failure to plan an answer strategy and then monitor progress through this. Many pupils successfully completed the conversion and addition calculations, but didn’t complete the final step to find the proportion of children travelling by car. This mistake was made by pupils of all abilities but most commonly by middle achieving pupils. It emphasises that as well as further input and practice finding common denominators and adding fractions, pupils also need opportunities build on problem solving skills.

The NFER Tests range includes mathematics assessments for use across years 1-6. These standardised tests provide reliable standardised and age-standardised scores to help you confidently monitor attainment and progress, and are supported by a free online analysis tool. Click here to find out more.

Emily has been with NFER since 2001 and has worked on a wide range of projects, centred on developing test materials in science and mathematics, including for the Key Stage 1 and Key Stage 2 statutory tests in England and the Australian statutory NAPLAN test.

Emily is responsible for the development of NFER tests in mathematics, reading, grammar and punctuation and spelling. She is also a consultant member of the TIMSS 2019 Science and Maths Item Review Committee and in recent years has contributed to the development of their new practical science e-assessment tasks, as well as developing and trialling the standard science questions.

Do you have a question on assessment that you’d like to put to one of our assessment team? Send it through to us at assessmenthub@nfer.ac.uk.