Apprenticeships In England – are they working?

Currently the United Kingdom’s (UK) gross domestic product per hour worked is at least 20 per cent behind that of the USA, France and Germany, according to official figures from the Office of National Statistics. The green paper, Building our Industrial Strategy (January 2017) argues that the productivity gap between the UK and these other countries could be partially closed by developing the technical and higher level vocational skills of the UK workforce. This green paper argues that high-quality apprenticeships are a core way to improve these skills across the UK. The strategy also highlights that improving these skills is especially important because of the increasing mechanisation of low skill jobs and the UK’s departure from the European Union.

What has the Government been doing about apprenticeships in England?

In 2015, the Government set out its Apprenticeship 2020 Vision for England, highlighting that it wants to improve the technical skills of England’s workforce through apprenticeships. The vision states high-quality apprenticeships should be available across the country, at different levels and in all sectors of the economy. It commits to getting 3 million people to start apprenticeships between 1 May 2015 and 31 March 2020. The vision particularly focuses on improving participation from young people, aged under 19 years, encouraging them “to see apprenticeships as a high quality and prestigious path to successful careers”.

Rapid reforms have accompanied this vision. These include: passing The Enterprise Act 2016 which set up the Institute for Apprenticeships, moving responsibility for apprenticeships to the Department for Education (DfE) and introducing the Apprenticeship Levy (April 2017). (For more information see the review Apprenticeships policy in England, March 2017.) The levy requires all employers with a pay bill of over £3 million to pay 0.5 per cent of their total pay bill into an apprenticeship fund. This fund can only be used to fund apprentice training. The training for apprentices in smaller companies is paid for by the government (maximum £15,000), in the form of an apprenticeship levy allowance.

What do the latest statistics say?

Last week’s apprenticeship figures released by the DfE show overall data on apprenticeship numbers up to the end of July 2017, so it includes figures for the first three months after the levy was introduced. 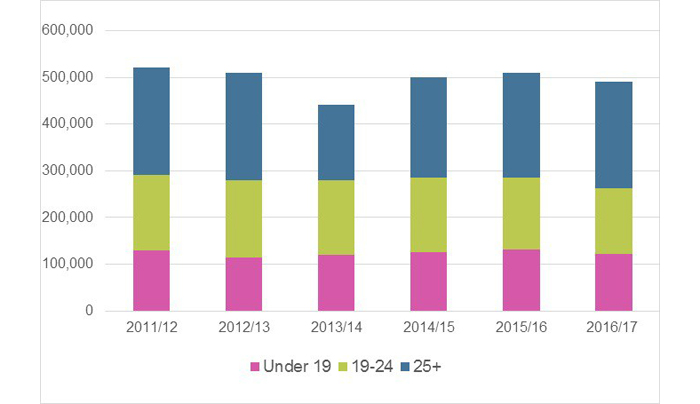 Between May 2015 and July 2017, there were a total of 1,116,000 apprenticeship starts. This equates to an average of 41,333 starts per month. If the same rate of uptake continues, the Government will fall around 560,000 places short of its 3 million target by March 2020. To achieve its target, the average starts per month need to increase to 58,875, a 42% increase. This would appear to be a challenge but the Government will be hoping that the new apprenticeship levy will substantially boost the numbers of people starting apprenticeships, once the policy has had more time to take effect. 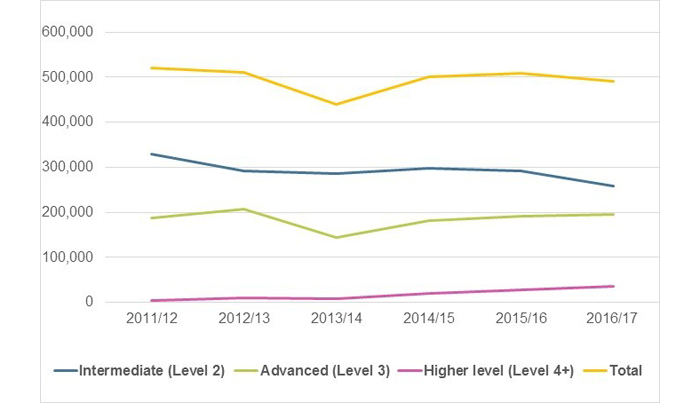 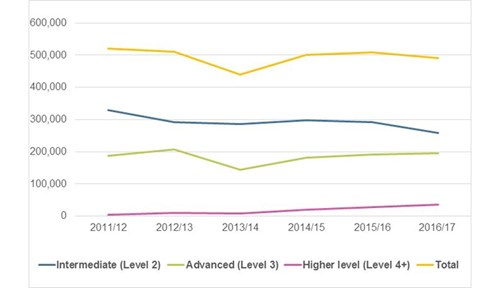 What is missing from these statistics?

Although the recent numbers are interesting, they crucially do not allow us to work out if apprenticeships are having the desired impact on people’s lives and to our economy. A recent CBI/Pearson report (July 2016) suggests apprenticeships are only meaningful if they lead to related skilled employment. However, as the data on education to employment is not publically available, it is currently not possible to say if these apprenticeships are leading to sustained employment related to the training provided and if these jobs are in areas of skill shortages.

It is also important to remember that not all people who start an apprenticeship will finish it. The report An Analysis of the Duration and Achievement of Apprenticeships in England (September 2017) shows that completion rates vary considerably by sector, level and the apprentice’s prior attainment. The report also highlights that completion rates themselves are open to misinterpretation, as many of the key reported statistics exclude apprenticeships that have been withdrawn part way through.

The figures also do not give any indication about the quality of the training being provided. The National Audit Office report Delivering Value through the Apprenticeships Programme(September 2016) emphasises that apprenticeships need to be of high quality, if they are to improve skills and add the desired value to people’s working lives and our economy. The Institute for Apprenticeships is currently consulting on the topic of quality, and on 27 September, it published a draft Quality Statement on the subject. Whilst this is encouraging news, until we have robust ways of measuring skills growth through apprenticeships, we will not be able to judge whether or not apprenticeships are having their desired impact on people’s skills.

Overall, without training-to-employment statistics, detailed completion rates by cohort and robust measures of apprenticeship quality/skills growth we cannot know if apprenticeships are meeting their aim of improving technical and vocational skills across the country. DfE’s role in collecting, analysing and disseminating this information will be vital for assessing the impact of apprenticeship growth on the nation’s skills base.