I read the latest DfE Statistical First Release on 2016 GCSE results with great interest. Although most of the press coverage focused on the league tables of schools and the relative performance of grammar, academies and local authority schools, I was drawn to the section on the attainment gap in state-funded schools. This was a case of good news/bad news. Good news: the attainment gap between pupils from disadvantaged backgrounds and others reduced slightly in 2016, as it has in four of the last five years. Bad news: progress is slow and the position of disadvantaged pupils in 2016 is almost the same as in 2013. In fact, the gap would have been the same as last year if you exclude the recent addition of results from students in FE colleges. 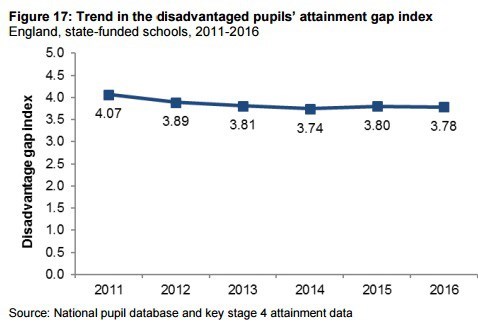 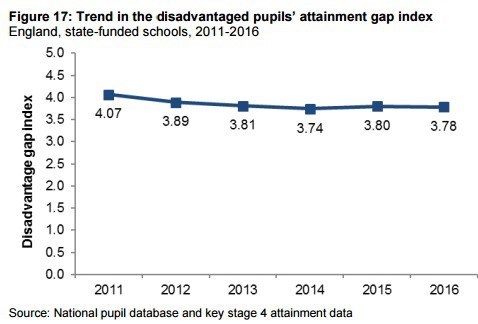 In 2015, I worked on a national study for the DfE which set out to identify what distinguishes schools where students from disadvantaged backgrounds achieve as well as, or even better than, students from non-disadvantaged backgrounds. The findings indicated that it was both what schools were doing (i.e. the strategies they were using) and how they were doing it (i.e. the way they were implementing their strategies) that was making the difference. More successful schools were more likely to be using metacognitive strategies, collaborative and peer-to-peer learning. They were also targeting pupil premium spending on high-achieving students as well as low achievers and they were using fewer strategies overall.

What really impressed me was their absolute determination to make sure every young person fulfils their potential. These schools used their pupil premium spending to help disadvantaged students in whatever way they could. Staff found out what motivated individual students and what was holding students back, and gave them the help they needed to achieve their goals.

Don’t all schools do that? Well, not quite. Successful schools seem to really know their young people, families and communities and are able to respond to their context while not accepting disadvantage as an excuse for poor performance. Some schools had started from a position of low attainment a few years ago and recognised the need to put in place the fundamentals of good attendance, behaviour and high-quality teaching before reaching for the latest initiative. Then they invested in staff training, improved their diagnosis, monitored progress and made swift decisions to keep, adjust or replace what they were doing if it wasn’t getting results.

It is also about the determination to ‘go the extra mile’. I remember the head who described doggedly ‘pursuing’ a parent as she walked down the road, until she agreed to make an appointment to discuss her son’s progress; a member of staff who re-worked the entire school timetable to ensure a student could take the subjects she needed; and a school which bought a bicycle for a student to ensure that he could get to school on time even if he missed the bus when he was caring for his mother.

I recognise that there is no quick fix and it takes time for schools to put effective strategies in place. But it is now five years since the pupil premium was introduced and at the current rate of progress it would take until 2088 for there to be no gap in GCSE attainment. So to answer my own question, the latest results suggest that there is still much to do because secondary schools are not currently making enough progress in closing the attainment gap.