You may, like NFER, have noticed the almost total lack of discussion on education issues in the main televised debates.  We hoped that the time might come last Sunday evening at the ‘non-Brexit issues’ debate.  Two audience members were randomly asked about what was important to them – they mentioned higher and further education, but the politicians were not asked to respond to any questions on education - not one question on education, not one.

Perplexed by the apparent mismatch between media coverage and the importance of education, our data scientists decided to look at the education debate through another lens – Twitter. NFER monitored English language Twitter feeds associated to the hashtags #GeneralElection and #GE2019 over two periods (14/11-21/11 and 24/11 to 8/12). The total number of tweets associated to general election was 194,027 and to election and education or related terms was 7,297.  On any day just 2-5% of election based tweets relate to education.  A daily analysis of this is shown below. 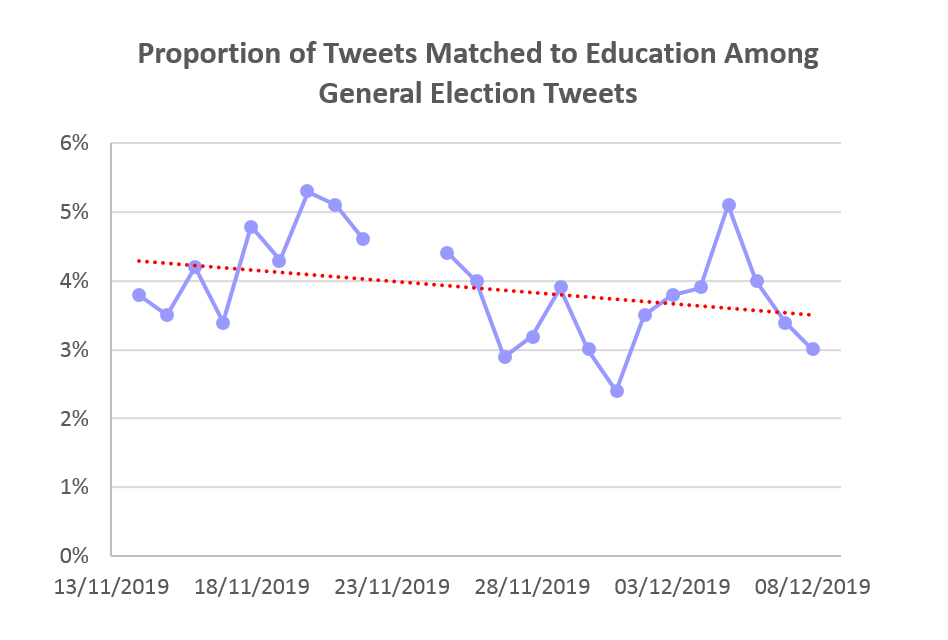 To what extent this lack of debate on Twitter is driven by the lack of debate in the media is unknown, but it does appear that where education related news has been covered in the media, the tweets relating to education have risen.  For example on the 3 December we released the PISA results and saw a 20% increase in education tweeting that day, coverage of the issues on PISA continued through the week, as people discussed the extent to which Michael Gove could or could not be congratulated for improvements in outcomes, and fretted about the woefully low levels of life satisfaction among our teenagers. Then at the end of the week EPI released their analyses of the education pledges in the manifestos. The week ended at a high peak. Now, as researchers we must be upfront and say that we cannot categorically claim cause and effect between our output, media coverage and tweeting, but what we can see is that where education gets in the news, it appears correlated to an increase in Twitter activity.

Quite clearly if the electorate are to have an informed debate (on whatever platform) on the issues that are of concern to them, then we need the media to cover those issues. At a recent media training day, we were informed of the criteria by which news outlets decide on stories, and relevance to the audience was on the list.  But also, there were others, the shock factor for instance sells news.  Our data scientists have attached the sentiment attached to education tweets and we can analyse this further.  In the meantime, happy voting.