Schools are duty-bound to provide a safe learning environment which keep children free from harm. Firm action to prevent and to tackle bullying, supported by effective monitoring and recording, lies at the heart of this.

However, bullying is still worryingly prevalent in Britain’s schools. New NFER data identifies that in London, one in five young people report that they have been bullied online, a figure that seems to be replicated in other parts of the country. This builds on some of our previous research, which illustrated that just over a third of primary school children have experienced verbal abuse, 42 per cent have been physically hurt, and a similar proportion have been excluded from joining friendship groups, activities or games. In addition, the Annual Bullying Survey 2015 shows that 55 per cent of students aged 13 to 20 have experienced bullying, which could indicate that the problem worsens with age.

This research is preceded by a Wales-based study published by Stonewall Cymru, which identified that more than two in five primary school teachers and nearly nine in ten secondary school teachers surveyed said that pupils in their schools experienced homophobic bullying.

We know that bullying, in all its ugly forms, wreaks devastating and enduring damage on its victims’ mental and physical health. Children who are bullied tend to do worse at school, have fewer friends, and have mental health problems which, at their most serious, can lead to self-harm or even suicide (Victoria Department of Education and Early Childhood Development, 2013). Recent research also links childhood bullying with a greater risk of obesity, diabetes, cardiovascular disease and hypertension in adulthood (Takizawa et al, 2015).

Recently, bullying has again hit the headlines for all the wrong reasons. Schools in Wales are struggling to monitor and define homophobic, biphobic and transphobic bullying, according to a new report led by Plaid Cymru Assembly Member (AM) Lindsay Whittle.

In addition, Estyn (the school’s inspectorate in Wales), reported in June 2014 that schools record and deal with bullying inconsistently, with substantial variation present within schools.

This is particularly worrying in light of the Annual Bullying Survey 2015, which shows that of the students who reported bullying, 92 per cent reported it to a teacher.

Combined, this evidence suggests that it is not only the extent of bullying that is concerning but schools’ and teachers’ capacity to deal with it. It also points to the need for central action to tackle what remains a highly prevalent and destructive problem in our schools.

The Welsh and UK Governments have both acknowledged this. In response to AM Whittle’s study, the Welsh Government stated its intention to create teaching resources which focus on gender and transgender-based bullying and drew attention to its new advice for pupils and parents who are affected by bullying. The UK Conservative administration is committed to tackling all forms of bullying, and has dedicated £2m to finding innovative ways of eradicating homophobic, bi-phobic and transphobic bullying in schools.

This action is promising. But still more needs to be done to help headteachers to understand the scale and nature of all types of bullying in their schools, and to empower them to take effective action against it. The first steps towards achieving this involve harnessing expertise and support from governments, researchers, and specialist organisations, and drawing on existing evidence to shape practice.

Schools have used NFER’s School Surveys to consult pupils, parents and staff on a wide range of matters, including bullying. The surveys are a tried-and-tested way of developing insight into specific issues, providing a baseline to measure progress in addressing them, and facilitating communication between the school and home settings.

Large-scale new independent research which works with schools to explore the types, location and suitability of the support available for them to signpost and/or deliver to victims and perpetrators of bullying is also needed so that we can reduce the legacy left by bullying. NFER, with its pedigree in working closely and sensitively with schools to lead high-calibre research of this nature, is excellently placed to undertake this work.

In tightening their practice around taking action on bullying, schools should re-visit the key messages from existing high-quality research such as Eurydice at NFER’s and Estyn’s papers which have drawn out examples of effective real-world practice in tackling bullying.

Taking up the valuable advice and support available from specialist organisations such as Stonewall would also support schools to address bullying.

For too long, bullying has damaged our children’s lives and opportunities. Working together, using and commissioning research, and listening to the experts are the first steps we need to work  towards stamping it out for good. 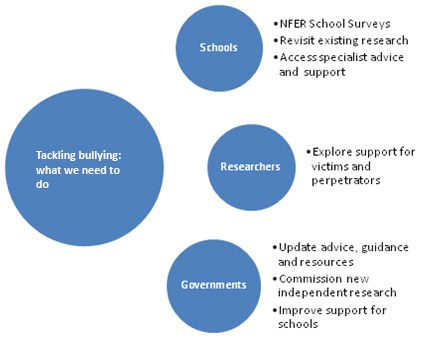