Choosing a secondary school: school allocations and tips for parents

At this time of year, many families with a Year 6 child are busy spending evenings visiting or researching their local secondary schools. Parents are likely to be spending lots of time debating the relative pros and cons of the schools they are viewing, assessing which will be the best fit for their child, and anxiously worrying about their chances of being offered a place at their preferred school. The cause of all of this frantic activity is the looming 31 October deadline, when parents with a Year 6 child need to inform their local authority (LA) about their preferred secondary school choices.

In this blog, we take a look at what has been happening with secondary schools applications in recent years and provide some tips for parents who are making their applications.

In England, parents of Year 6 pupils choose, in order of preference, between three and six [1] secondary schools that they would like their child to attend the following September. Families then submit these preferences through their LA which is responsible for administering the allocation of school places (Weldon, 2018).

As parents are able to make multiple choices, schools generally have more applications than they have places. When this happens, the LA ranks all children who wish to attend the school against the school’s published admissions policy. Admissions policies vary considerably between schools with some, for example, prioritising siblings, children of a particular faith or those with particular talents above others (Weldon, 2018). These criteria are used, in conjunction with family preferences, to allocate each child to a school. A child will be offered a place in their highest preference school, where they rank high enough on the admissions criteria to be considered for a place. If families do not submit any preferences

or their child does not rank highly enough in any of the schools they have requested, the family is directed to a school with available places. This is done after the preferences of all other families have been taken into account.

How have families been faring with getting their top choices?

Figure 1: More families are not being offered places in their preferred schools 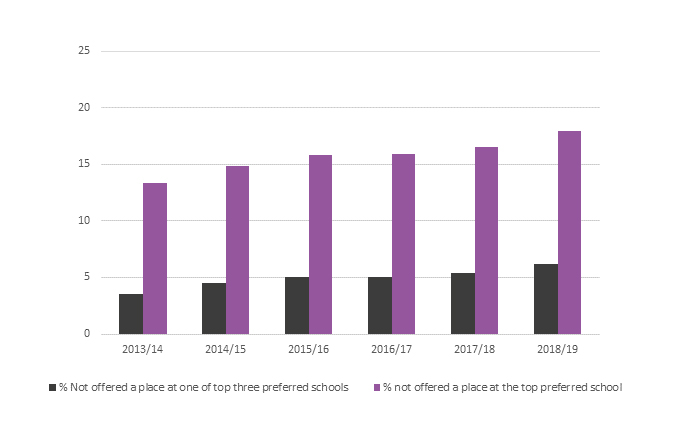 The chances of getting a place at your preferred school varies considerably across the country, and appears particularly difficult in urban areas. In 2018, only 51.4 per cent of families in Hammersmith and Fulham were allocated a place at their preferred school, compared to 98.1 per cent of families in Northumberland. All of the 20 per cent lowest ranking LAs, in terms of the proportion of families getting their first preferences, were in urban areas.  As Map 1 below shows, many LAs around the country have seen a drop in the percentage of families receiving their first preference since 2013.

There are a few tips that families should bear in mind when deciding which secondary schools to express a preference for:

To find out more about the secondary offers process in your area click here and enter your postcode.

To compare secondary schools in your area click here to use the DfE’s compare schools tool.

[1] The number of choices parents are offered will vary by LA.  Parents in metropolitan areas such as London tend to have more choices.