Could it be that disengagement leads to poor skills?

Last Thursday I attended two events in London: a Demos seminar reporting on ways to re-engage disengaged young people pre-16 years old, and an OECD seminar ‘Building skills for all – a review of England’ which offered policy insights from the survey of adult skills.

Demos reported that one study has shown that almost one half (45 per cent) of pupils have become disengaged from school by the time they sit their GCSEs. Additionally, around three in ten getting their GCSE results have not – for one reason or another – made expected progress in English since they started secondary school, and one third have not done so in maths. Students who are disengaged are disproportionately likely to contribute to these statistics, and are at risk of becoming Not in Education, Employment or Training (NEET).

The OECD told us that England has average literacy levels compared to other OECD countries but well below average for numeracy. We have nine million adults (more than a quarter of 16–65 year olds) with low levels of basic skills. Furthermore, the skill levels of our young people are particularly poor – one third of those aged 16–19 have low basic skills.

Rather a depressing day!

However, the data behind the OECD report has a little more nuance to it than the headlines capture. NFER has had rather a lot of involvement in these issues over the years. In fact, we were part of a team back in 2012 that collected the data that OECD reported last week. In 2014, my colleagues conducted additional analysis similar to that published by the OECD and found that young people in England show an above-average increase in skills after leaving compulsory education. A more detailed explanation is provided in this NFER blog post from December 2014, but if you look at the age effect, rather than the cohort effect, the results are rather different: 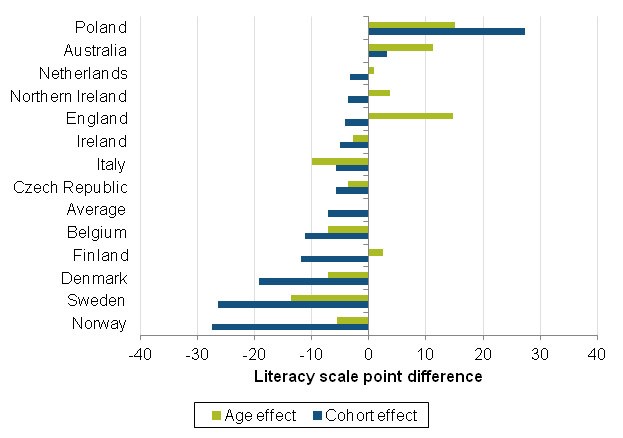 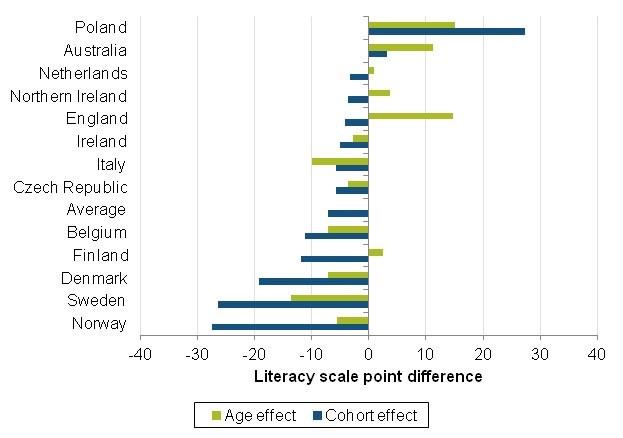 It should be noted that the age effect only provides a forecast of the skills gain we might expect to see the current generation of young people experience, based on the experiences of the previous generation. This may of course not materialise but, ever the optimist, I believe the good news is that we have already started to address the underlying issues behind the worrying statistics at age 16–19:

• Young people now have to stay in education, training or learning until they are at least 18 years old.
• Young people have to continue with maths and English (numeracy and literacy) post-16 if they have not achieved the required level of a C grade in GCSE.
• Most recently, Nicky Morgan has announced that legislation will ensure that other post-16 education providers (such as FE colleges) will be able to provide information to young people in schools so they will be more aware of alternative routes from education to employment other than A Levels and university.

My personal belief is that it is the last of these three initiatives that may yield the results our country needs and address the issues raised by Demos and the OECD. We need to re-engage our young people in learning and rekindle their thirst for knowledge. I believe this can only happen if young people are aware of different pathways from education to employment and that there are different ways of learning in different environments (and the importance of mastering English and maths – or literacy and numeracy – to help them master their chosen trades/professions/jobs and progress).

This can only happen if young people and their parents (and teachers) know about these opportunities and alternatives, and value them, before disengagement sets in.