Could teacher retention be improving?

The latest report by the Education Select Committee about the recruitment and retention of teachers argues that the Government should place greater emphasis on improving teacher retention. The committee explains that, based on the evidence they received, not only is retention a more cost-effective way to tackle the issue of teacher shortages, but more teachers staying in the profession for longer would strengthen the pool of applicants for leadership positions.

NFER agrees with the Education Select Committee that teacher retention is a priority, and over the past 18 months we have analysed and reported on trends in teacher retention. Our latest evidence suggests that teachers’ intentions are a little more positive than a year ago, particularly in the primary sector, although there continue to be serious challenges for the future.

Over the past five school terms, we have used the NFER Teacher Voice survey to ask a nationally representative sample of over 1,000 teachers whether or not they are considering leaving teaching within the next academic year. We have shared the results of earlier surveys in our Should I stay or should I go? and Engaging teachers reports. The first reports teachers’ intentions to leave teaching at one time point; the second looks at teachers’ intention to leave across four school terms.

This blog considers new data from our fifth and most recent Teacher Voice survey. We compare teachers’ intentions to leave across five time points, allowing us to identify any emerging trends. We’ll follow up and extend this analysis when we have more new data from the next two terms. 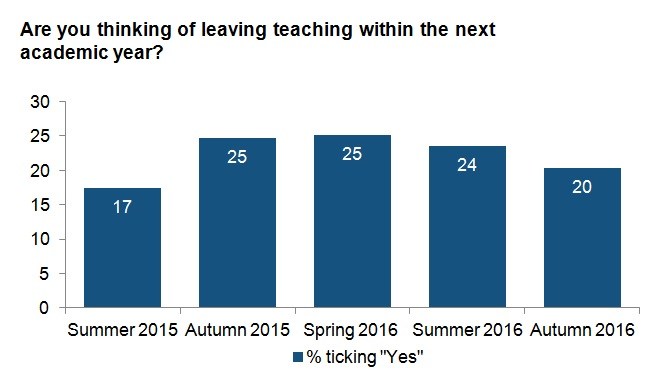 The findings from the Autumn 2016 survey tentatively suggest the proportion of teachers intending to leave teaching is falling. Overall, 20 per cent of our Autumn 2016 sample said they were considering leaving teaching within the next year, a significant reduction (5 percentage points) from the 25 per cent of respondents stating their intention to leave the previous autumn.

It is early days, but the latest survey results could be a sign that fewer teachers are now considering leaving the profession. NFER will be monitoring whether or not these figures do indicate the start of a trend that continues throughout the 2016-17 academic year or if this reduction is a one-off.

To find out if the reduction in teachers stating their intention to leave between Autumn 2015 and 2016 was in all schools or in certain phases we did some further analysis. 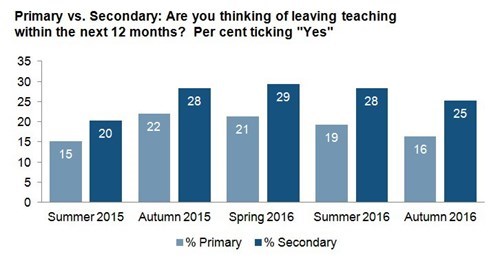 The analysis of our survey data shows that a lower proportion of teachers in both phases, were considering leaving in Autumn 2016 compared with Autumn 2015.

The reduction at primary level was statistically significant, with 22 per cent of teachers surveyed stating their intention to leave in Autumn 2015 compared to 16 per cent in Autumn 2016. However, the proportion of secondary teachers considering leaving is about the same as it was this time last year: 25 per cent in November 2016 compared to 28 per cent in November 2015. The difference between these two time points was not statistically significant.

While the latest results appear encouraging for primary schools, they are concerning for secondary schools which face a faster rise in pupil numbers over the next decade. NFER will be following the trends in both phases in the coming terms.

In March 2017 we should have two whole years’ worth of data and therefore a greater opportunity to explore if there are any seasonal trends. We’ll also have a clearer picture of whether or not the reduction in autumn 2016 continues further into the 2016-17 academic year.

NFER have also recently begun a new piece of research on the teacher workforce, funded by the Nuffield Foundation, which will analyse teacher retention in even greater detail. We will be sharing more about this new project in the next few days.

Watch this space for updates.