An edited version of this blog was first published in Schools Week on 14th July. 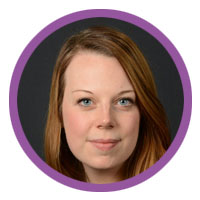 It is not acceptable that educational achievement is so strongly influenced by family circumstances. The deprivation gap is already large by the time children start school and recent evidence suggests this may have increased as a result of the Covid-19 pandemic. In our new analysis, building on findings from IELS, we found evidence that both family-level deprivation and the deprivation of the school area matter for children’s development.

We focused on children’s development in four areas of learning measured by IELS: emergent literacy (oral language and vocabulary); emergent numeracy (counting, working with numbers, shape and space, measurement and pattern); mental flexibility (children’s ability to shift their thinking according to the circumstances); and emotion identification (an important aspect of empathy).

Does the deprivation measure make a difference?

There are a number of ways to measure deprivation, including free school meal eligibility, family-level deprivation and the deprivation of the areas where children live and attend school.

IELS asked parents about their education, occupation and household income which was combined into a measure of socio-economic status (SES). Children whose parents had a higher (SES) demonstrated significantly greater development in emergent literacy, emergent numeracy and mental flexibility.

The level of deprivation in the area of a child’s school was also related to children’s cognitive development at age five, even after taking account of parental SES. Children who attended schools in the least deprived areas (measured by School-level IDACI[1]) had greater development in emergent literacy and emergent numeracy than those in the most deprived areas.

The graph shows the differences in development (converted to months) between the most- and least-deprived children according to the deprivation measure(s) which significantly related to children’s learning outcomes. 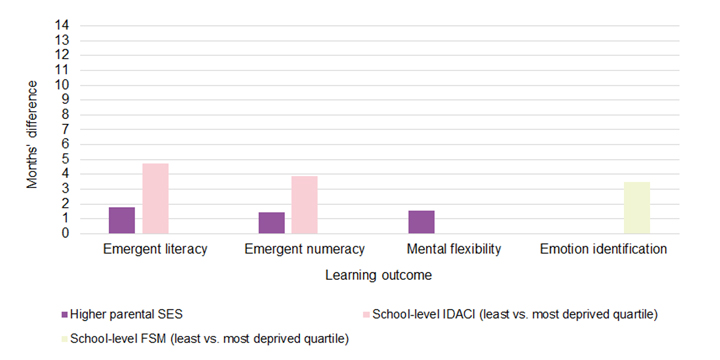 [1] The area in which each school is located is given an IDACI score, representing the proportion of all children in the area aged 0 to 15 living in income-deprived families.

It is useful for government to consider both family- and school-level deprivation when directing support to children in greatest need. Although we did find that having fewer children eligible for free school meals (FSM) in a school was positively related to children’s emotion identification development, we did not find an association at the individual level between   FSM and children’s development. A blog by my colleague Joana Andrade discusses the advantages and disadvantages of using FSM as a deprivation measure. 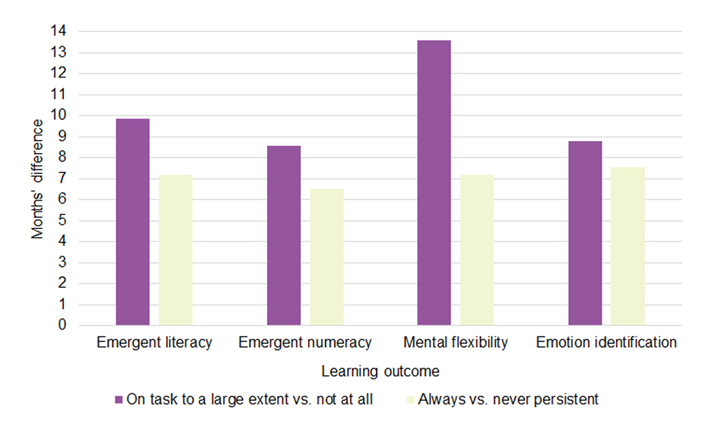 Attention had the strongest relationship with children’s development of all the things we measured, including deprivation, month of birth and gender. Children who were on task to a ‘large extent’ during the study demonstrated greater development than children who were ‘not at all on task’, especially in mental flexibility.

Being able to focus on a task gives children a strong foundation for learning. This has been imperative for children returning to school after the Covid-19 lockdowns, where children need to learn (or re-learn) listening skills and how to concentrate in a classroom setting.

Anyone who has been inside a primary school classroom will know that teachers are experts in obtaining whole-class attention; clapping a rhythm until everyone is focused or repeating phrases such as ‘1,2,3 eyes on me’. When I used to run Speech and Language interventions in primary schools, attention was a major focus. I said the words good sitting, good looking and good listening more often than I said good morning! To avoid cognitive overload, it’s important to break instructions down into smaller chunks, so as not to overload children with too many instructions or information-carrying words.

If at first you don’t succeed…

Persistence is important for five-year-old’s cognitive development, empathy and mental flexibility. The children who teachers identified as ‘always’ persistent – defined as continuing their planned course of action in spite of difficulty or obstacles – demonstrated greater development in these areas than children who were ‘never’ persistent, with differences equivalent to around seven or eight months across the learning outcomes. Persistence is also important for children’s physical development.

When you, as an adult, are faced with an obstacle, do you a) give up or b) continue despite the challenges? Research suggests that children can learn to be more persistent through encouragement and watching adults trying again until they succeed.

Persistence is related to ‘executive function’: the brain’s higher order cognitive processes that enable people to plan, focus attention, remember instructions, and work on multiple tasks. Evidence suggests that executive function can be improved through classroom-based pedagogy (i.e. the method of teaching) and specific interventions.

Persistence is also related to efficacy – persistence is worthwhile only if you believe that your own actions can help you to succeed. And we know that an internal locus of control, i.e. the extent to which children feel they have control over their own success or failure, is positively related to their educational outcomes, see here and here for examples.

So what this latest research tells us is that deprivation is negatively related to young children’s development, but the positive link with attention and persistence is stronger still. The more we can do to help children become attentive and persistent, the more this is likely to stand them in good stead for the rest of their lives.

NFER was contracted to carry out IELS in England by the Department for Education. However, this blog has been produced solely by NFER and does not necessarily reflect the views of DfE.