Does the secondary sector have the capacity to continue expanding the English Baccalaureate?

By Jens Van den Brande and Jack Worth

Ever since the introduction of the English Baccalaureate (EBacc) as an accountability measure, there has been debate among practitioners and policymakers about the extent to which the policy has narrowed the curriculum and the implications for pupils’ access to a balanced education. 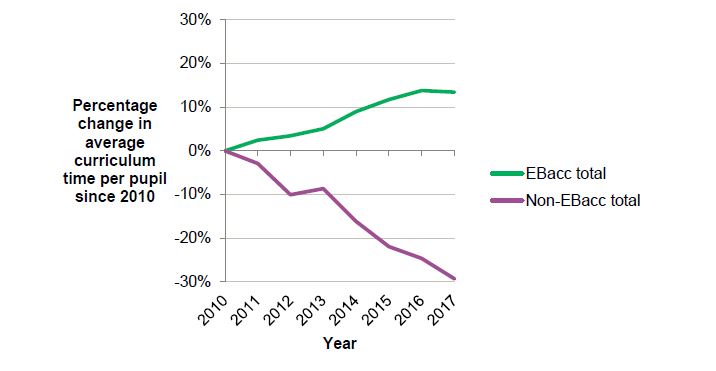 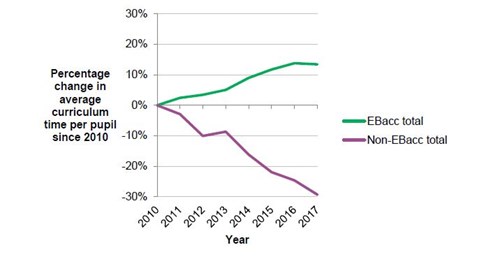 One of the main drivers of this trend has been changes to the secondary school accountability system, which has helped to continue the steady increase in the percentage of KS4 pupils studying EBacc subjects since 2010. The Attainment 8 and Progress 8 headline accountability measures give schools a clear incentive to steer pupils towards taking GCSEs in these subjects, to increase performance in school league tables.

Moreover, since secondary school spending per pupil has been relatively stable in real terms for the last seven years, allocating extra curriculum time and resources to teaching EBacc subjects may have often implied diverting them from non-EBacc subjects that offer less benefit to the school in terms of its performance, as evaluated by the new headline accountability measures.

Delving further into the statistics, it is clear that some non-EBacc subjects have fared worse than others. For instance, the exclusion of arts subjects (such as art, music, drama and dance) from EBacc is likely to have contributed to decreases in arts curriculum hours per pupil since 2013 (Figure 2), as well as a fall in GCSE entry rates. Yet the downward trend for arts subjects is not as drastic as in other subjects, such as Design and Technology, PSHE and Citizenship. Over the last seven years, the teaching hours per pupil dedicated to PSHE and citizenship have almost halved.

Figure 2: Changes in curriculum time since 2010 have differed between subjects, even between the EBacc subjects 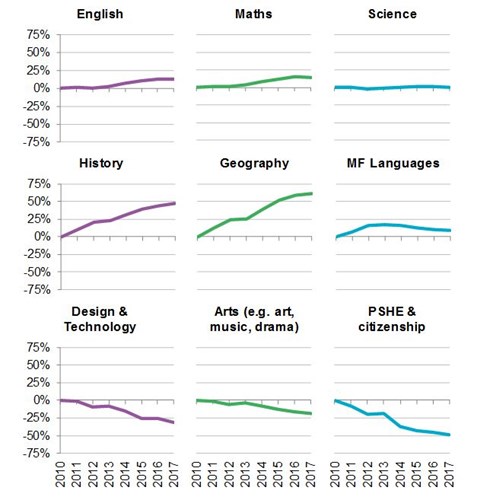 Likewise, there is significant variation between individual EBacc subjects. History and Geography have seen the largest expansions in curriculum time per pupil: 47 and 61 per cent increases respectively since 2010. For the changes in the remaining EBacc subjects – English, Maths, Science and Languages – there appears to be more going on than just spending and accountability policy alterations. At least part of the variation in teaching time per pupil for these different subjects is likely to be explained by the different teacher recruitment and retention situations.

High leaving rates of science and modern foreign languages teachers, and shortfalls in the number of entries to teacher training in these subjects compared to the government’s target, are to some extent restricting schools’ ability to offer more teaching in response to the growing incentive from the accountability system to do so. This could help explain why teaching time per pupil for Maths and English has increased and remained stable since 2013, whereas Science and Languages hours have been relatively stagnant in recent years. These issues are even more acute in certain subjects within these areas, such as Physics, where recruitment targets have been consistently missed and there are now fewer teachers with a relevant degree than 5 years ago.

Overall, and all else being equal, the downward trend in time dedicated to non-EBacc subjects seems set to continue, despite the government relaxing the timescale over which it intends to achieve the 90 per cent target. Squeezes on secondary school budgets may put further additional pressure on the resources allocated to these subjects. The pressures on secondary teacher supply seem to be growing rather than receding, which may mean that the government’s EBacc target will be difficult to deliver, even under the revised timescale.

And a wider question is to what extent is the trend for more teaching of EBacc subjects and less of non-EBacc subjects what pupils and parents want?

Look out for the next instalment in our school workforce in England series on the NFER blog later this week.