Today the Education Select Committee published their report on The role of Regional Schools Commissioners.

NFER provided evidence to the inquiry – both written and oral – based on our Guide to Regional Schools Commissioners. Our Guide explained the background and role of the RSCs, and presented an analysis of characteristics and challenges for each region, including the number of ‘coasting’ schools that the RSCs will need to tackle if the Education and Adoption Bill becomes law.

The Select Committee report will make difficult reading for some in Whitehall. Summarising the findings Neil Carmichael, Chair of the Education Committee, said:

For too long, and under all parties, the Department for Education has made changes to structures without setting out the big picture. Regional Schools Commissioners were introduced as a pragmatic response to a problem – the growing number of academies and the need for oversight of them. They’re doing a necessary job, but the oversight system is now confused, fragmented, and lacking in transparency.

Transparency is a key theme for the Committee; it is mentioned no less than 20 times in their report. In particular, the Committee emphasises that the landscape of oversight, intervention, inspection and accountability needs to be more transparent so that parents are more able to navigate it and comprehend the division of responsibilities between RSCs, local authorities, and Ofsted.

The report quotes research from PTA UK that ‘just one in ten parents know what role Regional Schools Commissioners play in their child’s education’. NFER research corroborates this. 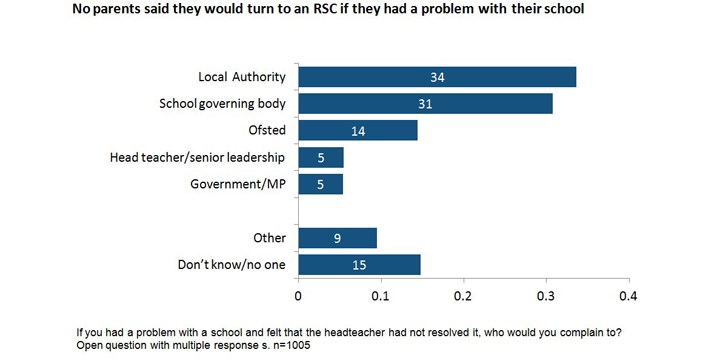 Our research into School Choice asked parents ‘If you had a problem with a school and felt that the headteacher had not resolved it, who would you complain to?’ Of the 1,005 respondents 504 answered. Of these, not one responded ‘RSC’ despite 30% of parents having children attending an academy school. Perhaps most worryingly, 15% admitted that they didn’t know who to turn to, or worse still felt that there was no one who could help. Parents left comments such as ‘who knows now they seem to be answerable to no one’; and ‘now that it is an academy I do not know. Perhaps I would try contacting the governors.’

At present the RSC role doesn’t include dealing with parent complaints (although David Carter admitted on this morning’s Today Programme that parents do occasionally contact him).  However, the point that I am trying to make is that few parents know this part of the education system even exists!

Next week, NFER’s Chief Executive, Carole Willis, will be chairing a panel discussion for the Centre for Market Reform in Education on the challenges of developing parent-facing accountability. In my opinion – and that of the Education Select Committee – one of the biggest challenges for developing appropriate oversight of changing education provision is ensuring transparency so that the system can be understood by everyone from politicians right through to parents.