English Baccalaureate: still much to do...

In November 2015, the Department for Education (DfE) issued a consultation document on implementing the English Baccalaureate (EBacc). Launched in 2011, the EBacc was introduced by the then coalition government to encourage pupils to study more traditional subjects. It is achieved by studying GCSEs in certain subjects: English, maths, science, history or geography, and a foreign language.  Pupils are required to achieve a good pass in five of these ‘components’ in order to achieve the EBacc.

In their consultation document, the government stated a clear ambition that, in time, at least 90 per cent of pupils in state-funded secondary schools should be entered for the EBacc. The consultation closed in January 2016 and as the DfE is yet to publish a formal response, we do not know whether this ambition will change. While we wait to hear, in this blog, we examine the latest progress towards this stated ambition, using the Department’s new figures that they published yesterday.

The latest headline figures show a small (one percentage point) increase in the proportion of pupils in state-funded schools entering the five EBacc components. With just under 4 in 10 pupils in state-funded schools entering the EBacc, the growth in this headline entry rate has hardly changed over the last few years, which shows that the government still has a long way to go if they want to achieve their proposed 90 per cent entry rate target for pupils in mainstream schools.

Analysis of entry by component

There is, however, some good news for the government. Looking beneath the headline EBacc entry figures, the picture is rather better for most of the EBacc subject components. This is the case in particular for science, where the proportion of pupils entering is now 86.7 per cent, which is up by 12.4 percentage points, and humanities where entries are up by 8.2 percentage points to 73.7 per cent. However, entry rates for languages have disappointingly seen a slight 0.3 percentage point decrease. Additionally, although the number of pupils entering five EBacc components has increased slightly, the latest statistics show that, of those that had only entered four components, the EBacc component pupils were missing in 77 per cent of cases was languages. These statistics reinforce what we already know – that the languages component of the EBacc remains the area of greatest challenge to overcome if the government is to achieve its 90 per cent ambition. However, these statistics also show that progress on improving language entries will also translate to marked improvements in the headline EBacc entry measure, so if this is to remain a government ambition, the language component is where policy action should be focused.

Although the government’s stated ambition relates to the take-up of EBacc, there is of course another accountability headline measure which relates to EBacc achievement.

Yesterday’s published data shows a small increase (0.6 percentage points) in the proportion of pupils in state-funded schools achieving the EBacc. However, as the Department noted in its statistical release, half of this increase is due to a change in methodology regarding achieving the English component, meaning that only a 0.3 percentage point increase was due to actual pupil results.

The latest statistics show there remains a large difference between the numbers of pupils entering the EBacc and those achieving it. This gap, which has been widening since 2011 when it was 6.2 percentage points, has now grown to 15.1 percentage points. This trend is concerning as pupils who currently enter EBacc subjects are likely to be the medium to higher attaining pupils whom schools believe are capable of achieving the EBacc.  As a greater number of lower attaining pupils start entering EBacc subjects, all other things being equal, this gap between entries and achievement might be expected to continue to widen. This is borne out by the data in the statistical release, which shows that in 2015 just over 5 per cent of the pupils who had a low prior attainment at key stage 2 entered the EBacc, and only 12.7 per cent of these pupils achieved it. However, in 2016 the proportion of pupils with a low prior attainment entering the EBacc rose to 8.3 per cent but the proportion achieving it fell to 10.8 per cent. 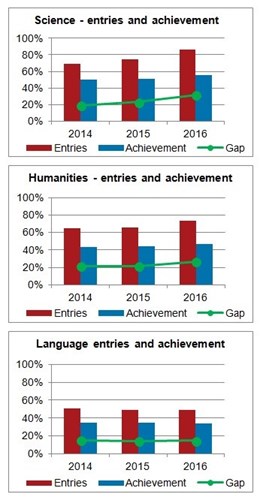 Analysis of achievement by component

Looking beneath the headline figures, as the charts show, although the number of pupils entering science and humanities has increased, overall achievement in these subject components has decreased by 5.2 percentage points and 3.3 percentage points respectively. This decrease is consistent with the greater number of lower attaining pupils now entering these subjects but not achieving grades A* to C. The attainment gap for languages is unchanged, however, possibly because low attaining pupils, whose schools feel they are unlikely to achieve an A* to C,  have not been entered for a language.

There has already been much reaction from a range of respected organisations and commentators across the sector about the impact that a near-compulsory EBacc would have on narrowing the range of subjects being studied at GCSE. Its suitability for a large proportion of pupils has been questioned. Such pupils might be better served by being able to decide to study alternative qualifications that better suit their aims and interests. However, looking at this purely from a pupil attainment perspective, if the gap between entries and attainment continues to increase, as a greater number of lower attaining pupils are studying these subjects, it surely cannot be a good experience for these pupils or a good outcome for the EBacc qualification itself.  A key challenge therefore is how the government and system leaders can help schools drive up the attainment amongst lower attaining groups in order to improve the proportion successfully achieving the EBacc and so reverse this current trend.

In conclusion, although Nick Gibb announced last month that the ‘EBacc debate is being won’, it can be seen that the government still has a long way to go to achieve their target of 90 per cent entering for the EBacc. The way forward needs to be carefully considered to ensure an increase in not just entry rates but, more importantly, achievement for all pupils.