Evidence-informed approaches to teaching – where are we now?

By Julie Nelson and Matt Walker

‘Despite growing recognition within the teaching profession of the potential of research evidence…embedding it into everyday practice is no mean feat’.

This was the message from a recent NFER blog post written by our NFER colleagues Pippa Lord and Nicola Ward. New findings, published today by the Education Endowment Foundation (EEF), shed further light on the progress of embedding evidence-informed practice (EIP) within teaching in England. Based on the findings of a nationally representative survey of 1,670 teachers and senior leaders in England, and undertaken by a team here at the NFER between September and November 2017, the survey builds on a previous one that we conducted for EEF in 2014, and which was published in 2017. The new EEF findings re-enforce those from the 2014 study with the finding that research evidence continues to have a limited impact in informing teachers’ decision-making.

In search of the Holy Grail

There is growing recognition of the potential of EIP to transform teaching and learning. However, there is often a disconnect between the talking about, and the execution of, EIP. There have been a number of practical infrastructure developments over recent years including ResearchED, the Chartered College of Teaching, and the Research Schools Network, which support teachers to adopt EIP. While these forums are resulting in some exciting practice developments, our survey findings (detailed below) suggest that there is still some way to go before we will see an embedding of EIP right across the profession.

As the figure below shows, teachers were much more likely to draw on their own experiences, or the experiences of other teachers/schools when making decisions about leadership or classroom practice, than they were to use information produced by research organisations. They were also very likely to use information gathered through continuing professional development (CPD). We could not exclude the possibility that some of this CPD might have been underpinned by research evidence, so we used a filter question to investigate this. We found that less than one fifth (16 per cent) of respondents who identified CPD said that it was based on research conducted by academics or independent researchers. This reinforces the overall finding that research evidence continues to play a relatively small role in decision-making. It is important to recognise that teachers will not always be explicitly aware about whether or not a source is evidence-based. Therefore, these findings could mask some evidence-informed practice that we were unable to measure. 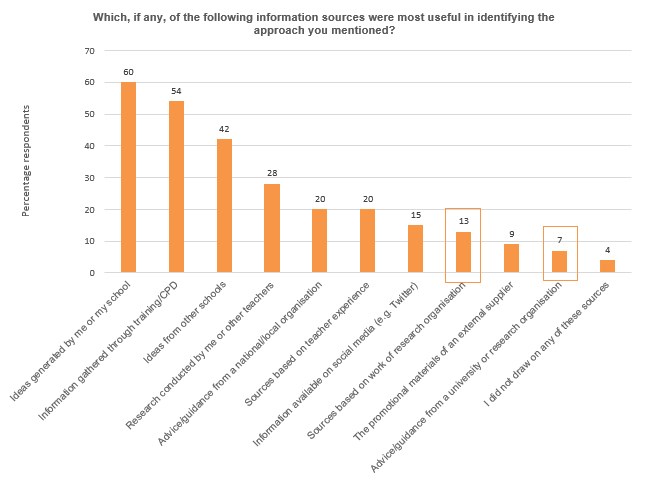 Respondents could tick up to four responses so percentages do not sum to 100.

Key finding 2: Most teachers report that their schools offer supportive environments, which enable EIP to flourish.

Despite the relatively small role played by research evidence in informing teachers’ decision-making, our survey found that large proportions of teachers believed that their schools provided positive climates for professional learning and EIP. A number of research studies show that schools which have a strategic vision coupled with practical resource allocation, and which encourage and trust teachers to innovate, are correlated with high levels of research engagement. However, smaller proportions believed that their schools had formal processes in place to support this vision, or made resources available to help them critically engage with evidence. This indicates that, as Brown and Zhang argue, positive climates, alone, are insufficient to create practice change.

Despite the fact that research evidence had only a small influence on teachers’ decision making, teachers reported generally positive dispositions towards it. These findings correspond with learning from our previous survey, and from other research, which show that teachers tend to report positively about their own or their schools’ beliefs and values, but are less able to provide evidence of practical application or of supporting structures and resources.

It should also be noted that survey responses varied by school phase (primary vs secondary), by type of respondent (senior leader vs middle leader/classroom teacher) and by type of school (high vs low pupil attainment) and there was more evidence of EIP in some groups, or types of school, than in others. For example, senior leaders, primary school teachers, and schools with the lowest 25 per cent of attainment were more likely than their corresponding groups (middle leaders/classroom teachers; secondary school teachers; and schools with the highest 25 per cent of attainment) to report that their schools had a positive/enabling research culture, and that they used research to inform their selection of teaching approaches. We found no significant differences between respondents in schools with different percentages of children eligible for free-school meals (FSM).

Our survey findings add to the growing body of research on EIP. They suggest that research evidence continues to have only a small influence on teachers’ decision-making relative to other sources of information – not least, those based on personal experience. We have argued elsewhere that effective EIP occurs when there is a convergence of at least three forms of evidence: research evidence; classroom data; and professional judgement. Our survey shows that schools regularly draw on their professional judgement and on classroom data when making decisions (as they should). However, it appears that there is still work to do to complete the EIP jigsaw by bringing research evidence more consistently into the mix. Results show that there is a willingness among senior leaders and teachers to engage with research evidence, and that many schools have climates which are supportive of its use, in principle and, sometimes, in practice. However, this willingness, and those positive climates, are not consistently translating into evidence-informed decision-making across schools in England. It appears that teachers typically view research evidence as a nice to have, rather than an essential, tool in their decision-making repertoire.