Executive Headteachers: What’s in a Name?

The naming of reports can be a tricky affair. Try to be too witty and the meaning becomes obtuse. Try to be too literal and it sounds boring. But the naming of our new report on executive headteachers (EHTs) didn’t suffer from this problem. One of the considerations we faced from day one of the project was understanding the great variety and breadth of the role. There is more than one kind of executive headteacher and the role is still evolving in response to the self-improving school system, so understanding what’s in a name was a pivotal part of the project.

The research was a collaboration between NFER, the National Governors’ Association and the Future Leaders Trust. All three organisations were interested in the EHT role, which has seen considerable growth over the last five years. Our analysis revealed a 240 per cent increase since 2010, resulting in 621 EHTs recorded in the School Workforce Census (SWC), a figure which is likely to be an underestimate of the true numbers operating in the system. That said, it should also be noted that EHTs currently only make up around three per cent of the overall headteacher population.

The role is still evolving at a national and local level and, while it is very clear that the role is varied both within and between school groups, we were able to draw out the commonalities of the role. We found three strategic priorities that EHTs focus on to varying degrees: school improvement, organisational expansion, and partnership growth. Whilst traditional headteachers will also focus on these areas, it seems that EHTs are recruited to add capacity and to fulfil particular aspects of these priority areas. We also identified four distinct functions or roles that EHTs undertake to a greater degree than their headteacher counterparts. These are strategic thinking, coaching and staff development, consistency and collaboration, and being outward facing. 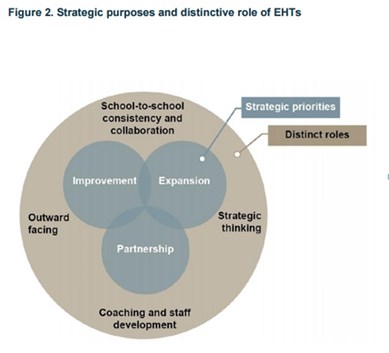 By understanding what distinguishes EHTs from their traditional counterparts, and by identifying a set of distinct situations in which they are deployed, we can start to appreciate ‘what’s in a name’. It was from this evidence base that the report suggests the need for a profession-led definition of executive headship – importantly, this allows for a range of appropriate operating models.

When we discussed the research at an event to launch the report last week, this was one of the more debated topics.

On the one hand, guests highlighted how certain groups require greater clarity in order to fulfil their professional remits. For example, increased clarity would support governors during appointing procedures, deciding remuneration and writing job descriptions. Clarity about who has legal responsibility for a school would also help external bodies such as Ofsted, and would enable proper records to be collected in national datasets such as the SWC and Edubase.

On the other hand, guests were concerned that a fixed definition would be problematic because of the interaction with other leadership positions such as headteacher, CEO and national and local leaders of education. The role of the EHT needs to be set in this broader governance context. There was also a concern that it could be premature to define the role, in a fast evolving system, before more is known about what the most effective models are.

Based on the evidence, any ‘definition’ would need to cover the wide spectrum of EHT roles and recognise the creativity and pragmatism that has led the self-improving school system to this point. The profession needs to continue to be at the forefront as the role develops.

An area where there was far more consensus amongst guests was the importance of this topic and the need for further evidence. Although this report may have made a contribution towards understanding ‘what’s in a name’, it was not able to address other important questions about EHTs, such as the impact they have on their schools or on the broader education system, or what the most effective settings and structures are in which to deploy them. So, whilst we continue to share the findings, learning and recommendations from the current research, our thoughts also turn to how we can continue this investigation (and how we name our next report).