The latest data on the teacher workforce in England published today by the Department for Education (DfE) describes the state of teacher supply just before the Covid-19 pandemic. The Universities and College Admissions Service (UCAS) also released the latest monthly data on applications to teacher training.

The overall picture painted by this data is one of renewed concern about the teacher supply situation in England’s secondary schools, but coupled with continued improvement in teacher retention rates and a surge in recruitment to initial teacher training (ITT) next year.

Below are four key things on teacher supply to note from today’s data:

It has been concerning to see secondary teacher numbers falling over the last five years in spite of rising pupil numbers, leading to staff shortages. The number of full-time equivalent secondary teachers increased very slightly in 2019/20. 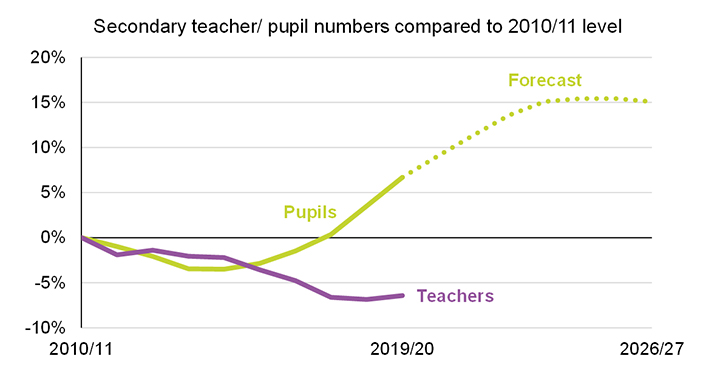 Last year was the first in many years in which the overall teacher leaving rate fell. The leaving rate has fallen again this year, for both primary and secondary teachers, to the lowest level since 2012. Both the number of working-age classroom teachers leaving state-sector teaching and the number retiring fell in 2019/20. The figure below shows the overall rate and the breakdown for secondary classroom teachers, and the picture is similar for primary. 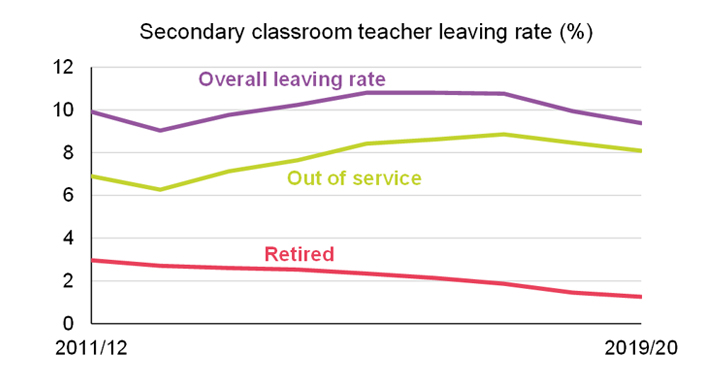 This is evidence that retention rates improved further in 2019/20, which is good news for teacher supply as every teacher retained is one more we don’t need to recruit through teacher training.

As the UK economy has been plunged into a recession since this data was collected, we expect that next year’s data will show even lower leaving rates, particularly for working-age teachers. Data from Teacher Tapp shows that many teachers have changed their career plans in the months since the pandemic started.

As we reported in our recent 2020 Teacher Labour Market in England report, despite the fall in the overall teacher leaving rate in 2018/19, the rate of newly-qualified and second-year teachers leaving was continuing to increase. However, the latest data shows that fewer teachers are being lost from trainee cohorts in the last year. This is a promising sign that a corner has been turned on early-career teacher retention.

DfE’s revisions to last year’s data within this year’s publication does also show that the retention rate of second-year teachers into their third year was actually better than initially reported and had already begin to improve in 2018/19 (see methodology for the detail of the revisions). 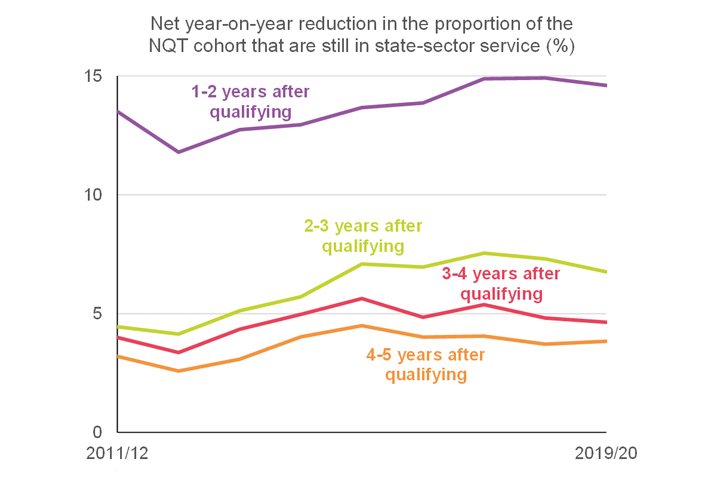 Note: Measures the net change in the proportion of a qualifying cohort of teachers that are in service from one year to the next. The measure is not quite a ‘leaving rate’: while it includes teachers from the cohort of NQTs who left in that year, it also nets out those from the cohort who return to service in that year.

It is worth noting what this does and does not, tell us about recent policy changes, in light of the timing.

First, the Government’s proposed large increases to the pay of early-career teachers was announced after the teachers from these cohorts had decided to leave, so would have not had an influence. However, the improvement in retention could have been influenced by the previous year’s 3.5 per cent increase in early-career teacher pay.

Second, these cohorts would not have experienced the Early Career Framework – an entitlement to a two-year support package for new teachers – as it will only begin rolling out from this September.

Today’s UCAS data shows that the number of applicants to initial teacher training for 2020 in England and Wales increased throughout May and June to higher levels than in previous years. There was an average of 179 new applicants per day from mid-May to mid-June, which is unprecedented in recent years, especially given the time of year which tends to be slower than the early spring. 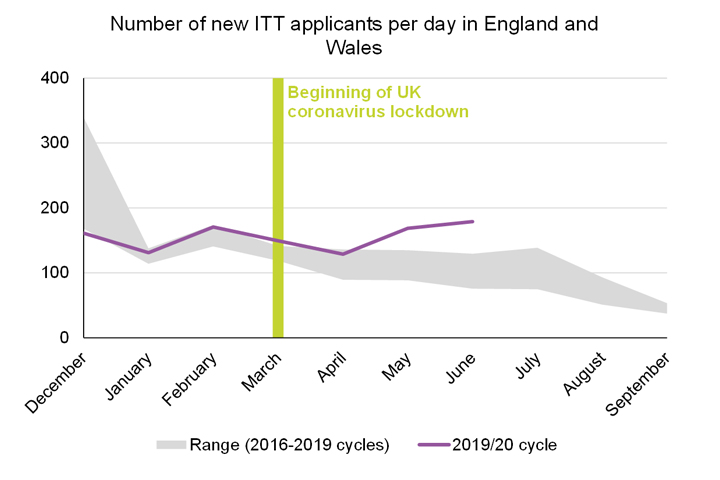 This surge means that the overall recruitment numbers are eight per cent higher than last year and seven per cent higher than the year before. As has been seen in previous recessions, increased uncertainty in the wider economy tends to lead to higher job security in teaching relative to other occupations, making teaching more attractive. The current uncertainty in the labour market appears to be leading more people to apply to enter 'recession-proof' teaching.

Given the recruitment shortfalls and rising pupil-teacher ratios over many years, this is potentially great news for the future of teacher supply. However, there are real concerns emerging about whether there will there be enough placements in schools to train the next cohort. Both Teach First and the National Association for School-Based Teacher Trainers (NASBTT) have reported increased difficulties in finding school placements for trainees next year.

Continued concern for secondary, but signs of green shoots

The overall picture painted by this data is firstly one of renewed concern about the teacher supply situation in England’s secondary schools. Pupil-teacher ratios have continued to rise due to compounding shortfalls in recruitment and low retention.

However, there are signs of improvement for the future, with teacher retention rates for all teachers and early-career teachers, and a new surge in recruitment to ITT next year, and retention, due to the recession induced by Covid-19.