GCSE Entries: How are non-EBacc subjects faring since the introduction of Progress 8?

There has been much discussion regarding the impact that the EBacc and Progress 8 accountability measures have had on pupils’ choice of subjects at GCSE. Many commentators have expressed concern and provided evidence that the current accountability system will lead to falls in the take up of more creative and technical subjects. Today marks the fourth set of GCSE outcomes to be released since Progress 8 became the headline accountability measure for all schools, and it is timely to review what has happened to GCSE subject entries.

The Government introduced a new accountability measure called the English Baccalaureate (EBacc) into its school performance tables in 2011. Five years later, in 2016[1], the Government reformed the secondary headline accountability measures for all schools, moving from a threshold measure (the proportion of students achieving five GCSE grades at A*-C) to Progress 8, which takes into account pupils’ prior attainment. Progress 8 consists of each pupil’s best 8 results from four different areas: English, maths, three further EBacc slots, and three ‘other’ qualifications. As five of the available eight slots are reserved for EBacc subjects, commentators have been concerned that this may lead to curriculum narrowing.

What has happened to GCSE entries since EBacc was introduced?

To assess how the subject entry landscape has changed, we have tracked GCSE entries since 2009, the year before the EBacc measure first appeared in the Department for Education’s School Performance Tables. Between 2009 and 2019, the number of GCSE entries overall increased by 1.9 per cent. However, entries into EBacc subjects have increased by 12.6 per cent over the same time period, while entries into non-EBacc subjects have fallen by nearly 30 per cent! To look at this in another way, 81.4 per cent of all GCSE entries in 2019 were in EBacc subjects, compared to 73.6 per cent back in 2009, which is an enormous shift.

Have EBacc entries been gradually increasing over the last decade or has there been a less consistent pattern? As Chart 1 shows, it is actually the latter. After a small amount of growth in 2012 and 2013, the proportion of GCSE entries in EBacc subjects fell back by about three percentage points in 2014 and 2015, before starting to increase again, growing strongly from 71.4 per cent of all entries in 2015 to 81.4 per cent in 2019. This change in direction in 2016 coincides with when Progress 8 became the headline accountability measure for all schools, suggesting this measure has indeed had a very real impact on GCSE entry patterns.

Chart 1: The increase in the proportion of GCSE entries in EBacc subjects appears to be driven by the introduction of Progress 8

What is happening to non-EBacc subjects?

At first glance, this paints a rather bleak picture for non-EBacc subject entries, but is this the whole story? Have all non-EBacc subjects seen declining entries since the introduction of Progress 8, or is it simply that some have declined more than others? To investigate this, we grouped GCSE subjects into the following categories according to their focus: English, maths, sciences, humanities, languages, the arts, technology, social sciences and others. Chart 2 shows the proportional change in entries for some of these non-EBacc subject groups from 2009 to 2019.

Chart 2: Not all non-EBacc subject groups have decreased markedly 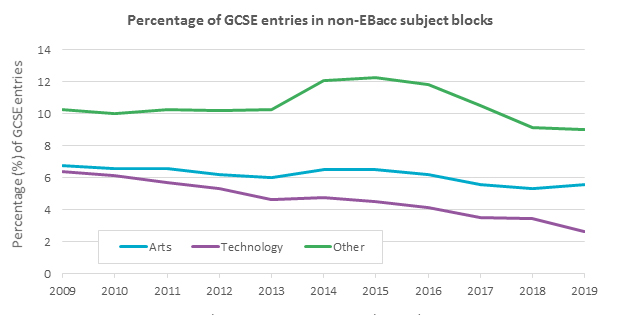 As Chart 2 shows, it is technology subjects that have been most heavily affected by the growth in EBacc entries, falling from 6.4 per cent of the total GCSE entries in 2009 to just 2.7 per cent in 2019. Technology was in decline in the early part of the time period, from 2009 to 2013, before enjoying a brief renaissance in 2014 and 2015 (when GCSE entries into EBacc fell), before starting to decrease again in 2016. The Design and Technology GCSE in particular has seen entries plummet by nearly two-thirds since 2009.

Conversely, entries in art subjects, while down over the time period 2009 to 2019, have held up much better than technology subjects, and indeed entries have increased by nearly six per cent in the most recent year. Art and Design has been the success story, having maintained its share of GCSE entries at 2009 levels. However, Music and Drama have seen large decreases in entries since 2009.

So what does all this mean for schools?

Most notably Progress 8 is likely to have led to a narrowing of the curriculum in some schools. Non-EBacc subjects such as Design and Technology, Music and Drama are seeing declining entries. Schools may stop offering these subjects if there is not sufficient pupil demand and this could impact on the school curriculum for younger students.

The narrowing of the curriculum at GCSE could lead to knock-on effects at Key Stage 5, where these subjects are likely to see a further decrease in entries. Indeed, we have already seen a steady increase in entries for facilitating subjects at A level (A levels the Russell Group have previously recommended students take to maximise their chance of university entrance), as discussed in our previous NFER blog. It will be interesting to monitor these trends to see if non-EBacc subjects bounce back in their number of entries in future years, or if the continued presence of Progress 8 leads to their entries diminishing yet further.

[1] Note that secondary schools were given the opportunity to opt into the new Progress 8 measure a year early, in 2015, but just 327 schools (around 10 per cent) chose to do so.