GCSE results 2018 – What is happening with the reformed subjects?

By Nailah Mahmud and Chris Dixon

Jubilation, disappointment, and cautious optimism are some of the many emotions likely to have been on display as students received their GCSE results yesterday. We congratulate all students on their hard work and all of their teachers who have done a fantastic job in preparing their students for their exams. In this blog post, we take a look at the GCSE attainment data that the Joint Council for Qualifications (JCQ) released yesterday, with particular focus on what is happening with the new reformed GCSEs.

In 2013, the government set out plans to reform GCSE examinations in England to address concerns around grade inflation and the “dumbing down” of content (Long, 2017). The reforms introduced a more challenging curriculum, new linear examinations which focus on one-off assessment at the end of study as opposed to modular assessment throughout the course, and a new grading system (9-1). This year’s results were released in the midst of ongoing changes to assessment, with results from a second tranche of newly reformed subjects being reported for the first time.

The overall UK GCSE pass rate is up on last year by 0.5 per cent.

After a dip in 2017, this year has seen a rise in the proportion of entries graded C/4 and above across the UK, with 66.9 per cent of entries graded C/4 or above across all subjects (i.e. a ‘pass’ grade as set out by the Education Secretary). Despite girls continuing to achieve a higher proportion of passes than boys, the gender attainment gap has narrowed slightly from 9.5 per cent in 2017 to 9.1 per cent this year.

The pass rate in reformed subjects has fallen

For the remainder of this blog, we turn our attention to looking at what has happened to these reformed subjects, focusing specifically on England, where these reforms have taken place. The second phase of GCSE reforms examined for the first time this year brings the total number of reformed subjects to 23, which includes almost all subjects with large volumes of entries. The overall pass rate in all 23 subjects that had been reformed by 2018 is 66.8 per cent. The pass rate for these same subjects in 2017, when only three subjects had been reformed (English Language, English Literature and maths) was 70.9 per cent. This decrease is primarily driven by lower pass rates in 2017 reformed GCSE subjects (English, English Literature and maths), which is discussed below.

What is happening with the 2017 reformed subjects?

Looking at pass rates for the three subjects that were reformed in 2017, Figure 1 shows some curious changes between 2017 and 2018. While English Literature has increased by one percentage point, the reformed English and particularly maths GCSEs show worrying dips. However, these falls appear to be largely due to shifting entry patterns in English and maths. In 2017, while most students took exams in these reformed subjects, there were still nearly 50 thousand and 140 thousand entries in the legacy English and maths GCSEs respectively. Although it is not possible to tell from the published JCQ data, it is probable that these entries are post-16 students doing re-sits. The pass rate for these legacy GCSE entries was about 20 per cent in each subject, much lower than in the reformed versions of these subjects.

Figure 1: The pass rates for the GCSE subjects reformed in 2017 have decreased for English and maths

What happened to pass rates for the subjects reformed in 2018?

Once again, this is a slightly muddied picture as there have been some changes to subjects between 2017 and 2018. For example, in science a new Science double award in England replaced the Science and Additional Science GCSEs which were available in 2017.  However, we are able to compare the majority of these 2018 reformed subjects and we estimate there has been a small increase of about 0.5 per cent in the pass rate for the new reformed GCSE subjects in 2018. Most subjects saw a small increase in their pass rate, but a handful saw a small decrease.

What has happened to the gender gap in reformed subjects?

It has been suggested that the move to linear examinations may favour boys, but what does the latest JCQ data say about this? It is difficult to discern what impact the 2017 reformed subjects had on the gender gap as a significant number of students took the legacy GCSEs in 2017 and we do not have a comparable baseline to measure changes from one year to the next.

We can, however, look at what has happened to the gender gap for the subjects that were reformed subjects first examined in 2018. Our analysis shows that girls continued to outperform boys in almost all the subjects in 2018, the exception being Physics which boys now have a slight advantage in. However, the gender gap overall reduced by 0.9 of a percentage point to 8.0 per cent in 2018 across these subjects. Interestingly, the gap has not closed across all subjects though; it has for all of the sciences, computing and humanities, but has widened in other subjects like music, drama, PE and religious education. 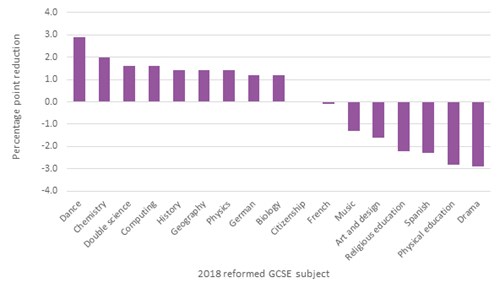 Note - a positive difference equals a reduction in the gender gap

In conclusion, it looks as though the pass rates in the 2018 reformed GCSEs have improved at the same rate as for all subjects overall in England. At the same time, the gender gap has narrowed across these new reformed subjects.  It will be interesting to see in 2019, when the next figures are published, whether these improvements are sustained.

Nailah Mahmud is currently completing a Nuffield Foundation Research Placement at NFER, where she has been analysing recent trends in GCSE attainment data. She is studying for A levels in Chemistry, Maths and Economics, and aims to begin her university study next year.