Globalisation – Is it shaping national curricula?

Globalisation is usually observed from an economic perspective but has impact in many areas of life – and education and school curricula are not immune from the forces and impact of this international phenomenon. Perhaps the most obvious example of this in education is the influence of large-scale international surveys such as TIMSS (Trends in International, Mathematics and Science and Study) and PISA (Programme for International Student Assessment) that have facilitated the evaluation and comparison of different educational systems.

In England, for example, the impact of international comparisons has been seen most clearly in mathematics education. This is due to the government’s focus on countries and educational systems with high mathematics performance, such as Shanghai and Singapore. One outcome has been the Department for Education releasing funding to support the South Asian ‘mastery’ approach to teaching mathematics.

Globalisation of the curriculum

While there is evidence of the influence that globalisation has exerted on teaching styles and methods, examples of the effect it has exerted on curricula are more limited. One example comes from England where the new national curriculum, introduced in 2014, was benchmarked against the best-performing nations in the world to ensure that it was of high quality and would meet the needs of learners. Despite this example, only a limited number of empirical studies have focused on the globalisation of curricula and the impact that globalisation has had on the content of national curricula.

The key questions are:

Recent research conducted by NFER offers valuable insight into this by investigating the globalisation of science curricula over the last 20 years, using extensive data from the TIMSS science study. 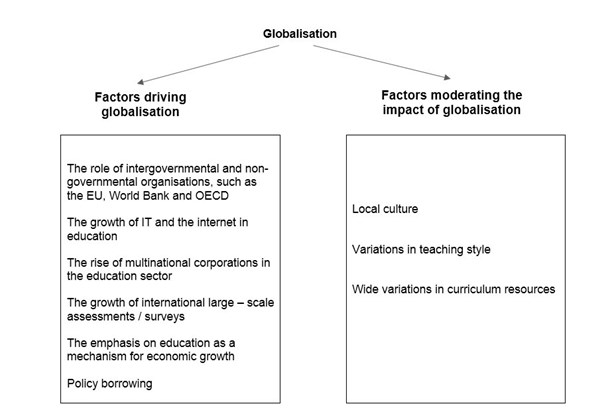 Has there been convergence in science curricula content over time?

By comparing curriculum questionnaire data in TIMSS surveys between 1999 and 2015 we were able to identify a number of findings in relation to the convergence of science curricula over time.

Are there still differences in science education between countries?

Despite the evidence for curriculum convergence identified in our research, the study also identified variations in international science education. One example was in relation to the time spent teaching science. Some countries (such as Qatar) for example spend three times as long teaching science as other countries (such as New Zealand). These variations have persisted over time.

In answer to the initial question posed by the title of this blog, our research does suggest that globalisation is shaping the content of national science curricula, with topics taught in different countries converging over time. Despite this convergence, wide variations still exist in other aspects of science teaching, such as the amount of time dedicated to teaching science and the types of skills emphasised within different science curricula.

Looking to the future it is likely that science curricula will become even more globalised as countries seek to adapt their curriculum to include more topics that address the major issues of our time, such as climate change, sustainability and genomics. And, as even more countries participate in studies such as TIMSS and PISA, it is possible that they will use the findings from these studies to evaluate and amend their science curricula to better match those of the highest performing countries.