How good is performance management in UK schools?

It is widely acknowledged that teacher quality is central to school effectiveness and that improving the quality of teaching is fundamental to school improvement.

Data in a recent study by Bloom, Genakos, Sadun and Van Reenen (2012), which measured the management practices in public and private sector organisations in different countries, sheds some light on these questions. The World Management Survey deployed an innovative methodology, separately interviewing managers and staff with a common survey (though adapted for context) that asked participants to explain aspects of management within the organisation through open questions. Researchers scored individuals’ responses from 1 (‘worst practice’) to 5 (‘best practice’) and averaged the scores for each organisation into a single indicator. The researchers were also blind to performance data for the organisations when conducting the survey.

The central components of the management measure are three commonly accepted staff performance management techniques: monitoring (how well do organisations monitor what goes on?), setting targets (do organisations set the right targets/ track the right outcomes?) and incentives (are organisations promoting and rewarding employees based on performance?). All have arisen in new regulations and in recent discussions about extending performance-related pay (PRP) in schools in England.

Five findings relevant to management practices in UK schools that emerge from the World Management Survey data are:

1. Management matters (it seems). Management scores are positively correlated with performance: with profitability in firms, mortality rates in hospitals and attainment in schools. Another recent study has shown a correlation between the same management measure and measures of university performance.

The results for schools suggest that a one management point increase on the 1 to 5 scale is associated with an increase of around four GCSE grades per pupil. However, the fact that schools that are better at monitoring and setting targets tend to do better in GCSE performance could be interpreted as the effect of gaming rather than any learning gain. Correlation in this case is a long way from causation, but the results should encourage further research into this question.

2. Management practices in UK state schools are better on average than those in other countries. The average management score in UK schools, as measured by the survey, is significantly higher than Canada, Sweden, Germany and the US. The gap between UK schools and schools in other countries is particularly wide in terms of incentives. The Government’s desire to introduce PRP comes despite this data suggesting that UK state schools already lead the world on staff incentive practices. 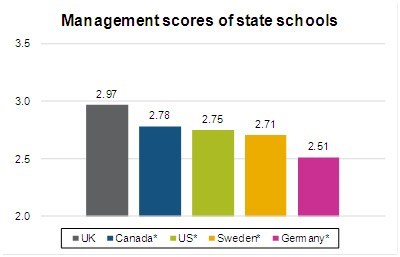 3. There is a wide variation in management scores. The data shows that performance management ranges across the state school sector from poor to good. The difference in the UK between low (10th percentile) and average management scores on the survey is the equivalent of around two GCSE grades per pupil: having good as opposed to poor management practices makes a big difference. 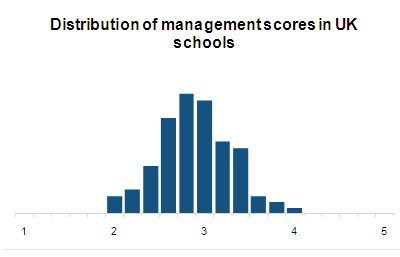 4. Independent schools do not outperform state schools in the UK in terms of management. This is in contrast to countries such as Sweden and Germany where management practices in private schools are considerably better than those in state schools. However, the figures should be interpreted with caution as only 11 UK private schools were sampled. 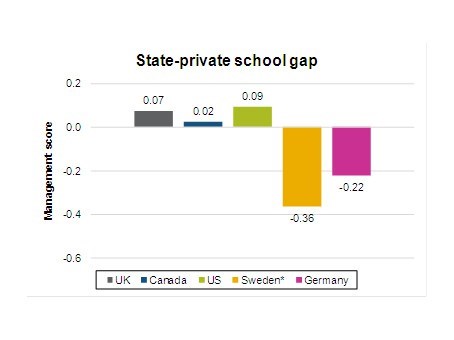 5. Average management score in state schools is significantly higher than in NHS hospitals. The gap is driven by differences in targets and incentives practices. The researchers attempted to adapt the instruments to each sector’s context while making the figures comparable. There are differences between the instruments used, so it is debatable whether comparability has been achieved, but both are in the public sector and staff in both areas could be said to be motivated to some extent by pro-social behaviour.

The evidence from the World Management Survey does seem to suggest that the critics of performance management practices in UK schools have overstated the extent to which the sector lags behind national and international best practice. It also suggests there is plenty of room for improvement, though the path to improvement is not a straightforward one: gains may not be made from simply adopting the trappings of best practice. That management practices (probably) matter for school performance means it is worth finding out more.