I have a choice

Today, parents up and down the country will be anxiously waiting to hear if their son or daughter has been accepted to join their chosen primary school. Next year, I will be joining the nervous masses, but this year I am just gearing up for it. In fact, last weekend, I spent much of my time looking at the websites of local primary schools and discussing with my husband the factors that are important to us in choosing the school that our three-year-old daughter might attend. Whilst admittedly slightly ahead of the curve (well what would you expect from an education researcher and an English teacher), this is a choice that an ever increasing number of families will need to make this autumn.

Choosing a school is one of the key points at which parents experience national policy through a local lens, and as such, should be an important election issue both in the big debates and on the doorstep. However, research has shown that while it appears that choice is supported in theory, the reality is more complex. For example, analysis of the British Social Attitudes Survey suggests that support for choice is counterbalanced by, among other things, opposition to vouchers, school diversity, and by strong support for the idea of sending children to the ‘nearest state school’.

In the first of a series of blogs, I will be exploring new NFER data on school choice – whether parents believe they have a choice, what factors are important considerations in making a choice and  parents’ understanding of the different school types that are on offer. 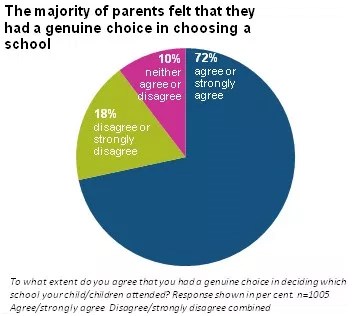 Back at the beginning of the year, NFER commissioned a nationally representative survey of parents. One of the first things we wanted to understand was whether parents genuinely felt they had a choice when choosing a school. Last year, according to DfE figures, nearly 90 per cent of parents got their first choice of primary school for their children (DfE). Most respondents to our survey (72 per cent) also felt they had a choice, although slightly fewer than got their first choice – highlighting that in some instances there may only be one real option available.

Beyond this, we wanted to know what elements parents consider important when making this choice. In-line with existing research (e.g. SMF) we found that local factors are paramount – ‘school that suits my child’ and ‘location’ of the school were each identified by almost half of respondents to our survey. 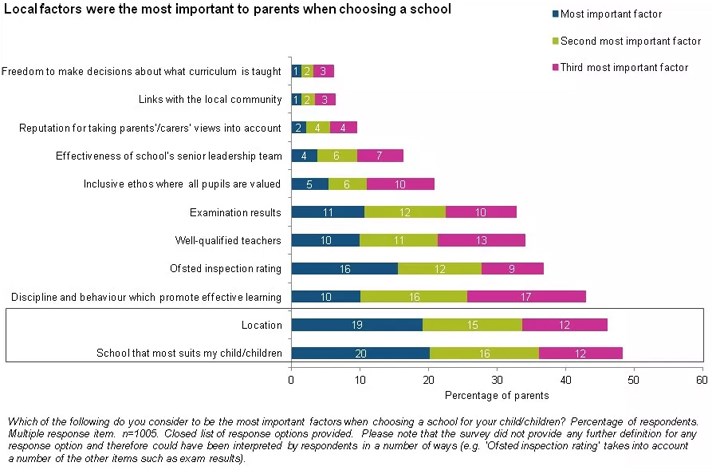 These factors have some interesting implications for current policy debate. As my colleague Geoff Gee argued in the first of NFER’s Election Blog series back in October, the general election is taking place in the context of a national rise in pupil numbers (pupil numbers in state schools are expected to grow by 12 per cent between 2014 and 2023 from 7.1m to 8m) and primary school places are an issue that many parliamentary candidates may be questioned about on the doorsteps by their electorate.

A recent report by Policy Exchange argued that free schools have a potential role to play in increasing parental choice and driving up standards through competition, as well as creating more school places in areas of basic need. However, Ben Durbin, and others, have indicated  that more analysis is needed to properly understand the impact of free schools.

Fully understanding what drives parents’ choice of school is  important in developing  policy in this area, and to raise school standards.  The importance of location – with many parents expressing a strong perference to send their child to the school that is closest to them – does not support a market-driven approach to raising attainment standards (unless parents are already excercising choices through the housing market).

In future blogs, I will look inside this interesting new data in more detail – are the factors that influence choice the same for all people? What lessons are there about local education decisions that need to be considered at national level? What information do parents want when they are making these decisions and how can NFER help?

In the meantime though, I will return to looking at my local schools and thinking about the choices my family need to make and my little three-year old case study of school choice.