By Jack Worth and Jens Van den Brande

Training enough teachers to meet the growing demand is fundamental for the functioning of England’s education system. The latest Department for Education (DfE) statistics, released today, on the number of teachers enrolling in initial teacher training (ITT) show that the number of trainees has increased this year. However, the data also shows that the challenge of training enough teachers to meet rapidly growing demand continues.

The latest ITT data shows some positive trends for teacher supply in England. The numbers of entrants to primary teacher training has met the target, set by DfE to ensure sufficient supply for future years, again this year. The number of new secondary trainees is also five per cent higher than it was last year. However, the overall number of entrants to secondary teacher training remains below the target number required to maintain supply for the sixth year in a row, which is a concern for teacher supply.

The situation varies considerably between different secondary subjects, and it is subjects with long-standing supply issues that are struggling most. Recruitment to teacher training in Maths is almost 29 per cent below target, which has increased from 23 per cent last year and 18 per cent the year before. The number of new trainees in Physics this year is more than 50 per cent below the target numbers required to maintain supply, up from 34 per cent last year. Recruitment to train in Modern Foreign Languages (MFL) also continues to be below the target, this year by 12 per cent compared to 9 cent last year.

However, the picture is quite different in EBacc subjects that have historically found recruiting to teacher training easier. Recruitment to teacher training in English is ten per cent above target this year, which is a big change from last year when English was 12 per cent below target. History has also continued to recruit numbers that exceed the target set by the DfE’s Teacher Supply Model. 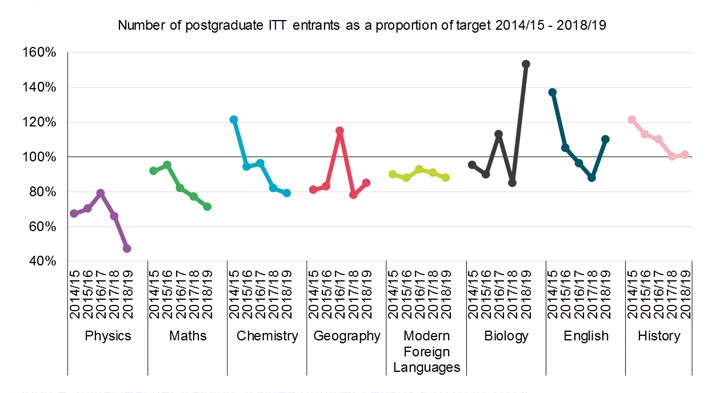 Is a Biology teacher the same as a Physics teacher?

Arguably they are interchangeable to some extent, though many would contest that. For example, many schools teach General Science rather than the three sciences individually without teachers being allocated solely to teach their specialism, especially in Key Stage 3.

However, over the longer-term and if the recruitment situation continues, the supply of Physics expertise within school Science departments will reduce. This may, in turn, encourage more schools to move to generalist teaching of science rather than teaching individual sciences, because of the undersupply of Physics specialists.

There are different schools of thought on how large a problem this is for pupils’ education, but the implications of the trends in this data are vital for informing that debate.

Is a PE teacher the same as a Maths teacher?

A more conservative adjustment, which also counts under-recruitment in Physics, but does not allow over-recruitment in Biology to counterbalance it, would suggest the overall secondary picture is no better than last year. However, as explained, there may be reasons to worry less about how interchangeable Biology and Physics teachers are, compared to PE and Maths teachers. 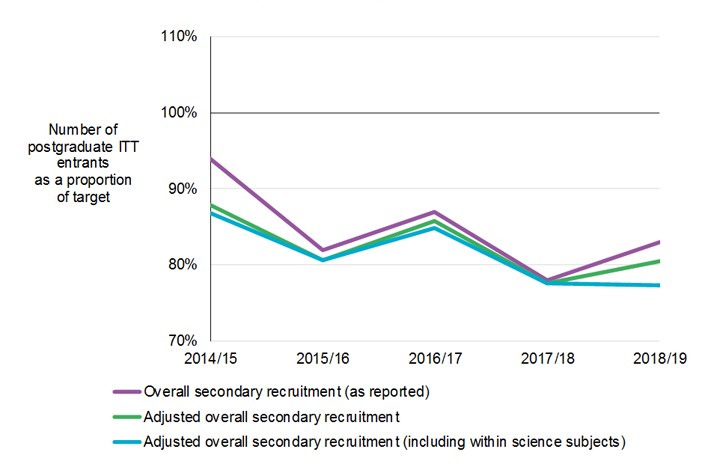 What is driving the teacher recruitment challenge?

Despite the increasing challenge of recruiting the numbers needed to teacher training, the number of new secondary trainees is higher this year than it has been in the last five years. This fact easily gets lost when the focus is on the proportion of the target that has been achieved. This is because recruitment targets have been increasing faster than the increase in new trainees over the last five years.

The main reason the targets have been rising is because secondary pupil numbers are forecast to increase rapidly over the next decade, which creates additional demand for teachers.

Another reason, which has affected different subjects differently, is policy changes that affect the demand for teachers of different subjects. EBacc, and the way it is embedded within the main Progress 8 accountability measure, has increased demand for History and Geography teachers, which has led to training targets increasing (see chart below). Despite Geography being below target in this year’s recruitment figures, the numbers of Geography trainees per year has actually more than doubled between 2014/15 and 2018/19.

Recruitment targets have been rising because of increasing pupil numbers 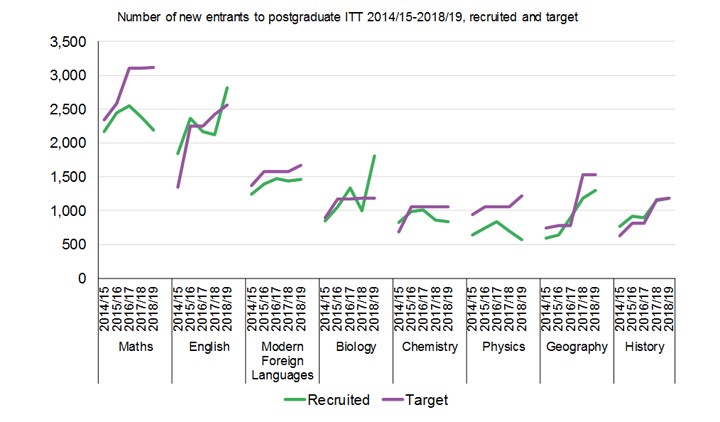 Retention and recruitment are two sides of the same coin

However, another reason why teacher training targets are increasing is because of rising rates of teachers leaving the profession. More teachers leaving creates additional gaps in staffing that recruitment needs to fill. The number of returners, an alternative to training more new teachers, has increased slightly in recent years, but nowhere near enough to meet the shortfall.

Every teacher retained is another teacher the system does not need to train, and improving retention would help to reduce future teacher training targets and make them easier to meet. NFER’s research has consistently highlighted this and we expect that the DfE’s emerging recruitment and retention strategy will recognise that recruitment and retention are two sides of the same coin in its proposals for policy action.

Subjects that have seen low recruitment tend to also be those with lower-than-average rates of teacher retention. This highlights the growing need for further policy action that specifically targets the supply of shortage subjects, particularly maths, science and MFL.

For more on NFER’s work in the School Workforce area, visit www.nfer.ac.uk/school-workforce/