ITT Applications in England and Wales

In our report in September, we looked at data from the Universities and Colleges Admissions Service (UCAS), tracking applications to postgraduate initial teacher training (ITT) in England, to quantify how the pandemic had affected application trends compared to previous years.

Our analysis suggested that, as of August 2020, the number of ITT applicants in England was 16 per cent higher than in 2019, and the number of accepted offers to primary and secondary courses were up 14 per cent and 20 per cent, respectively. Most of these increases can be attributed to Covid-19, as teaching became a relatively attractive career option in light of the ensuing economic crisis.

Yesterday, UCAS published the first data on applications in the 2020/21 cycle. Has the recession effect carried through into this year unabated? Or have bursary changes dampened demand? And what impact has Covid-19 had on teacher training in Wales?

2021 Cycle Applications in England
There have been changes to the admissions process for the 2020/21 cycle that affect the interpretation of the UCAS data. The Department for Education (DfE) has rolled out their own application service, which is separate from the UCAS system, and at this time no application numbers are publicly available. This means that UCAS data does not count applications made through the new service, and therefore gives an incomplete picture of application numbers in England. Wales, meanwhile, is unaffected by this change.

However, despite these data limitations, the incomplete data suggests that the application surge in England has continued into the new cycle. The number of applications to providers in England are 22 per cent higher in November 2020, compared to the same point last year.

As the new figures are underestimates, the true application numbers are, in fact, even higher. While we do not know the true percentage growth rate, we do know that, in spite of the undercounting, applications to ITT providers in England are unambiguously higher this year compared to 2019.

ITT Bursary Changes in England
The continuation of the application surge in England is particularly good news in light of ITT bursary changes made by the DfE for this application cycle. In response to increased interest in teaching training in 2020, the DfE reduced the value of bursaries postgraduate trainees receive when training in England, particularly in subjects that tended to recruit relatively well before the pandemic.

Bursaries are certainly one of many factors that influence the number of applications to ITT programs and, all else being equal, we would expect a bursary cut to reduce demand, and vice versa. Thus, the recent UCAS data is continued welcome news for teacher supply in England, and particularly reassuring that the bursary changes have not led to the bottom falling out of the market. 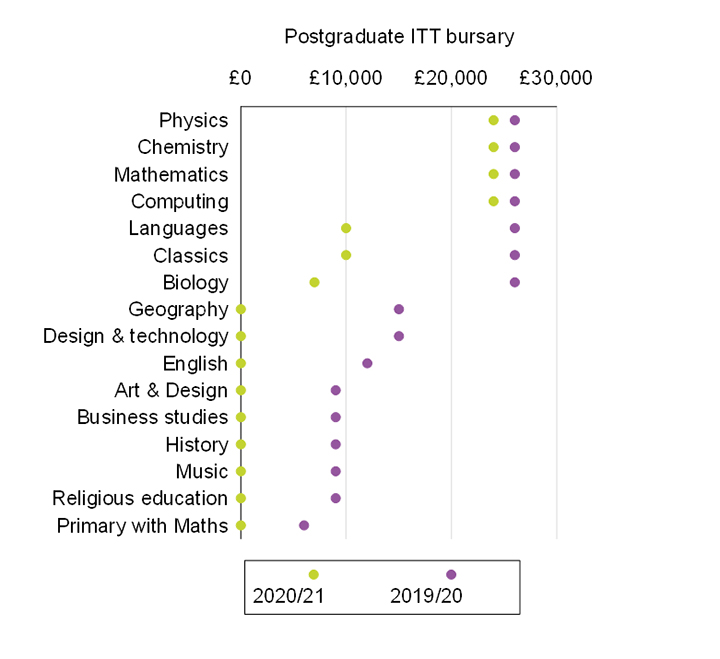 2021 Cycle Applications in Wales
In our September report, we focussed exclusively on the ITT system in England. A notable exclusion to the original analysis is Wales, which is also included in the UCAS data.

Like England, Wales experienced a surge in ITT applications from the spring of 2020 onwards. By September, applications were up by 27 per cent compared to September 2019, even higher than the 17 per cent spike for English providers.

In our teacher labour market in Wales annual report, we used Welsh Government school census data to highlight the teacher recruitment and retention issues that were emerging in Wales before the pandemic, so a spike in applications to ITT offers some welcome relief to these challenges.

However, unlike England, the early data in the current recruitment cycle seems to suggest that applications are, surprisingly, below the numbers from the same time last year in Wales.

Also in contrast to England, the Welsh government did not make any changes to their bursary funding model for the new cycle year. Bursaries for first class undergraduate, Masters and PhD students taking postgraduate secondary courses in maths, physics, chemistry, Welsh and computer science, for example, is £20,000.[2] Funding amounts are dependent on degree class and choice of program, but all values were unchanged from the previous year.

This should have the effect of ensuring demand for ITT postgraduates positions remains high for Welsh providers, although this does not seem to be reflected in the 2021 cycle numbers so far, which is both puzzling and potentially concerning for the Welsh teacher supply.

Further data publications from UCAS throughout the cycle should give us a better sense of whether the November drop in Welsh applications is simply a slow start, or a longer-term trend worthy of further investigation and action.