Key stage 2 national curriculum tests 2019: How did boys and girls differ across reading and maths?

The Department for Education released the provisional report on the 2019 key stage 2 national curriculum tests (NCTs) earlier this month. Key stage 2 performance was similar to 2018; the overall percentage of pupils reaching the expected standard in reading, writing and maths combined was 65 per cent (compared with 64% in 2018), with 11 per cent reaching the higher standard in all three subjects.

One key set of figures in this data is the difference in attainment between boys and girls. Of all girls taking the NCTs, 70 per cent achieved the expected standard in reading, writing and maths combined. This is compared to boys, of whom 60 per cent achieved the expected standard. This leaves a ten percentage-point (pp) gap in achievement between genders, up from an eight percentage-point gap in 2018. As the NCT data is reported as whole number percentages, it must be noted that rounding can potentially increase apparent differences; nevertheless a clear gap is present between boys and girls in reading.

What’s going on with the gender gap?
Investigating this further, the widened gap stems largely from an increased difference in reading performance. There is also a gap between boys and girls in writing; however, this is unchanged from previous years (furthermore, changes to the writing teacher assessment in 2018 mean these data are not directly comparable). Although both boys and girls saw a drop in reading attainment this year, it was disproportionate between the genders; the percentage of boys meeting the expected standard fell from 72 per cent to 69 per cent (3pp), whereas for girls this percentage fell from 79 per cent to 78 per cent (1pp).

Looking across the four years since the new national curriculum was first assessed, Figures 1.1 and 1.2 (below) show the attainment of boys and girls in reading and maths. The first graph shows that for reading, although performance of both genders follows a similar trend, boys’ reading attainment is consistently significantly below that of girls’, with some indication that the gap may be widening.

Figure 1.2* shows that for maths, the genders perform comparably, with around one percentage-point difference in performance across the four years. Maths performance shows a more steady increase in the percentage reaching the expected standard over the four years for both genders, compared to the more variable percentages for reading. 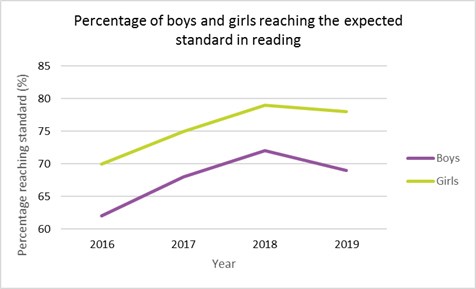 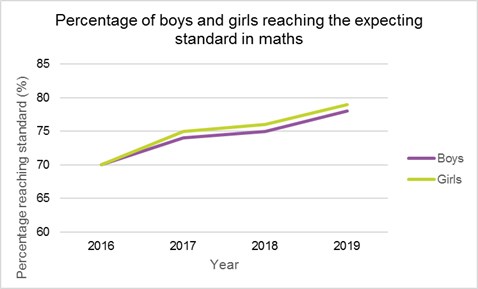 Does this pattern follow at the higher levels of achievement?
For reading at the higher level, the gap remains similar to that seen in relation to proportions reaching the expected standard, with roughly a ten percentage-point advantage for girls over boys (Figure 2.1 below). However, in maths, boys outperform girls with 29 per cent of boys achieving the higher standard in 2019, compared to 24 per cent of girls (a 5pp difference). In contrast to what is seen in reading, at the higher end of maths achievement, boys are performing better than girls. This is a fairly stable trend across the four years (Figure 2.2 below). 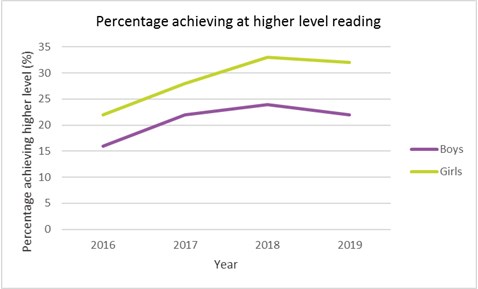 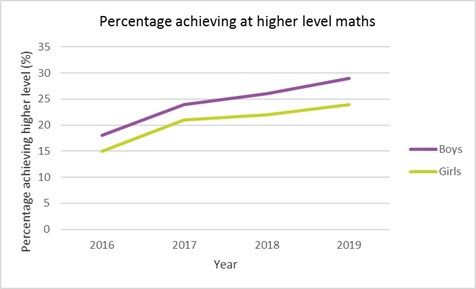 What might this difference tell us?
From the data presented in this 2019 provisional report, with comparison to previous years, we can see that there is a steady increase in the proportions of pupils reaching the expected standard in maths, but reading is an area of more difficulty for boys compared to girls. Looking at the KS2 trend over time for reading, the 2014/15 results show a 4pp gender difference in the proportion of pupils meeting the expected standard (level 4) at that time, which may suggest that this gap is gradually increasing. However, with the new curriculum being first assessed in 2016 and the new expected standard, it’s not possible to make any definitive conclusions.

For more articles and free guidance on assessment in primary schools, visit the NFER Assessment Hub.

*Figures taken from the 2019 Statistical First Release (SFR) data tables; https://assets.publishing.service.gov.uk/government/uploads/system/uploads/attachment_data/file/831006/KS2_provisional_publication_2019_tables_1109.xlsx (table N2a). The revised SFR for 2017 reported the data point for boys’ maths as 75, so there is 1pp discrepancy depending on which report is looked at. We have chosen to report the data released with the 2019 SFR.