Teacher recruitment has been a widely reported and challenging issue for the education sector in England for some time. Therefore, yesterday’s release of the latest Initial Teacher Training (ITT) statistics by the Department for Education (DfE), which show a continuing fall in both the number of final year trainees and the number of trainees awarded Qualified Teacher Status (QTS) is worrying. It is especially concerning given that more teachers will be needed in the next ten years to cope with both the large projected increase in pupil numbers and the fact that more teachers are leaving the profession before retirement.

The same pattern is observed when looking at the number of final year trainees achieving QTS, which is down 13 per cent since 2009/10. While the number of trainees in a teaching post within 6 months of qualifying has been more stable over time, the latest data also shows this figure has fallen over the past year, down from 27,730 to 26,690.

Figure 1: The number of trainees continues to fall, as does the number awarded QTS. 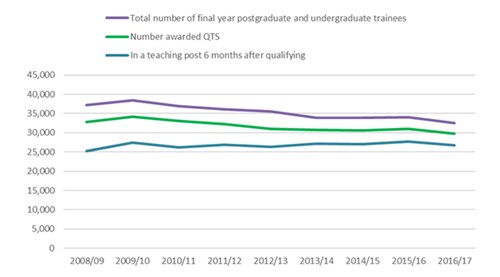 The share of trainees achieving QTS has been increasing steadily over time, from 88 per cent in 2008/09 to 92 per cent today. So while we have fewer trainees overall, the share passing their training is increasing. The same upward trend is also shown when looking at the share of trainees working as a teacher within 6 months of qualifying (Figure 2). This has risen from 68 per cent of all trainees up to 82 per cent, in part because more trainees are now achieving QTS.

It is difficult to know why these two increases have occurred. The rise could indicate an increase in the quality of students undertaking training and/or improved quality of teacher training courses leading to better outcomes. However, it could also suggest that trainees are increasingly being approved and employed because of an overall shortage of teachers. Despite the short-term benefit this would have on teacher supply, it may not be beneficial in the long term, as these newly qualified teachers may struggle the most once employed to achieve good outcomes for children. Indeed, this latter explanation may be linked to the falling rates of early-career teacher retention over the same time period. 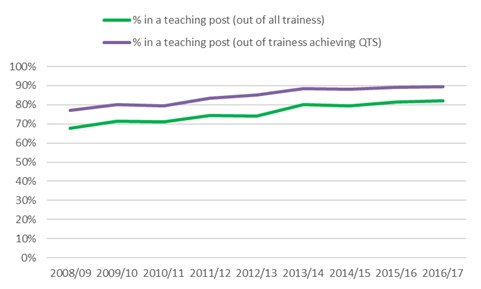 In addition, the problem of recruiting into subjects known to be experiencing long-term shortages of teachers, namely Physics, Chemistry and Maths, remains. Only 83 per cent, 88 per cent and 89 per cent of postgraduate trainees in these respective subjects achieved QTS in 2016/17, with the percent doing so in Physics actually falling by 2 percentage points on the previous year. This compares to an average of 91 per cent. When combined with the fact that recruitment of new trainees for these subjects has missed targets for several years now, along with the fact that teachers of these subjects are more likely to leave the profession, this figure becomes more worrying.

The Government will be pleased that previous pushes to encourage schools to be more involved in training have once again increased the share of trainees learning through a school-based route (up from 52 per cent last year to 54 per cent today). Yet there remains little difference in the success rates of those going through either route, as shown in Figure 3.

Figure 3: The share of trainees gaining QTS and the share finding work as a teacher six months after qualifying changes little with route taken 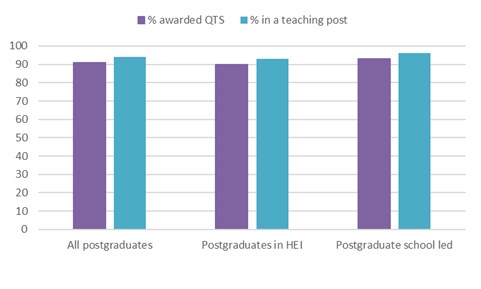 …as does achievement by undergraduate degree class

Overall, yesterday’s figures show that the challenge of teacher recruitment continues. This puts extra pressure on the Government to improve teacher retention, which previous NFER research has shown is a large and worsening issue. The recent announcement that pay for early-career teachers will increase above inflation is a welcomed reaction and may well help reduce the issues around recruitment. Yet more needs to be done. NFER’s work has shown that other factors, such as workload and flexible working are bigger factors in teachers deciding to leave or stay in the profession. As such, if the Government wants to improve recruitment and retention, it needs to be thinking wider than just pay.