More teachers are joining than leaving the profession, but will it be enough to meet demand?

By Sarah Lynch and Jack Worth

School workforce and teacher retention are high on the current education policy agenda and are the subject of on-going NFER research. The latest statistics from the 2016 School Workforce Census (SWC), published today by the Department for Education (DfE), shed some more light on the current state of the teacher labour market.

The number of teachers in the whole state-funded school workforce has continued to grow this year, as it has steadily every year since 2010. But is it growing fast enough? The projected rise in pupil numbers will have an impact on future demand for teachers. This is particularly the case in secondary schools, where pupil numbers are expected to start increasing rapidly as the previous growth in pupils in primary schools starts to feed through. Figure 1 plots the change over time in the number of secondary school teachers and the number of pupils, also showing the projected acceleration in pupil numbers over the next decade (dashed line).

In secondary schools, the pupil-teacher ratio has remained relatively stable since 2010 (when the SWC was first collected) as teacher numbers have tracked pupil numbers. However, secondary pupil numbers have started to grow and the increased growth forecast to take place over the next ten years means the system needs an influx of secondary teachers to meet this demand. However, the number of secondary teachers overall has declined. Furthermore, the rate of teachers leaving secondary schools has consistently been higher than the rate of joiners. This trend needs to reverse quickly if future demand for teachers is to be met. This could be a challenge as schools face funding cuts, which may result in a need to reduce staffing costs.

Figure 1: Secondary schools will need an influx of teachers to meet pupil demand 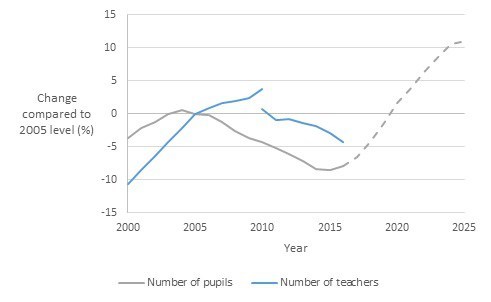 The situation is currently different in primary schools. Figure 2 shows that teacher numbers have kept pace with pupil numbers as they have grown rapidly over the last five years and primary pupil numbers are not expected to accelerate at the same rate over the next decade.

Figure 2: Number of primary teachers needs to be maintained to track pupil numbers 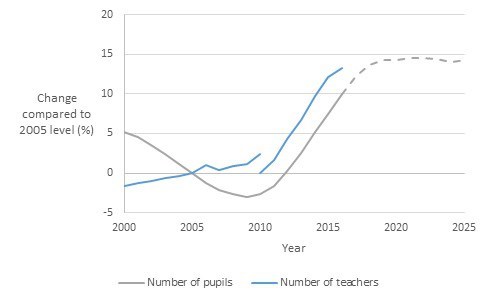 More teachers join than leave the profession, but the gap is reducing

The steady growth in teacher numbers in the state-funded sector overall has been driven by 43,830 full-time equivalent (FTE) teachers joining the workforce last year, outweighing the 42,830 teachers who left. These flows represent 10.1 per cent and 9.9 per cent of the teacher workforce, respectively. Figure 3 shows that the entrant rate has consistently been higher than the rate of leavers and both have increased between 2011 and 2016. However, both rates have declined in the last year and the gap between them is reducing.

Figure 3: More teachers join than leave the profession, but the gap is reducing 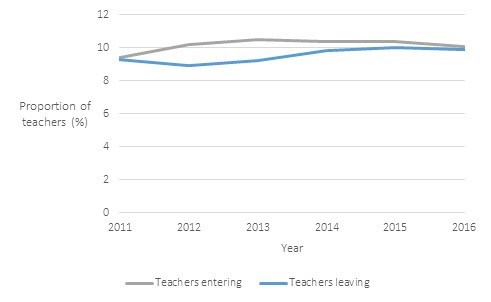 Figure 5: More teachers are leaving for reasons other than retirement 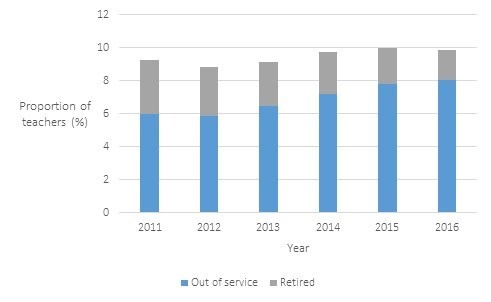 Although the number of NQTs has increased overall since 2011, the number has decreased in the last year (there were 25,510 NQTs in 2015 compared with 24,120 in 2016). Moreover, the number entering initial teacher training (ITT) programmes has not met Government targets, which are based on forecasts of likely future demand for teachers, for several years. If these targets are being missed and the number of NQTs continues to decline, how will gaps in the workforce be filled?

Today’s statistics suggest the shortfall has been at least partly filled by an increase in the rate of returning teachers (see Figure 6). The number of former teachers who have been encouraged back into the system has increased – 14,200 teachers returned to the profession in 2016 compared with 11,710 in 2011.

Of course, the statistics cannot tell us whether this is positive for the sector in terms of the quality of the workforce. Would these returners have been recruited back into the system had there not been a shortfall in the number of NQTs?

Figure 6: The rate of returners has increased 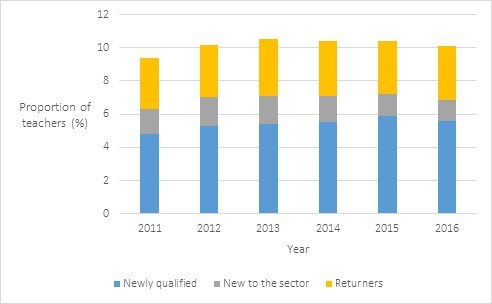 Retaining teachers early in their careers seems to be becoming harder

Retaining teachers in the years after they qualify is becoming more challenging. As Figure 7 shows, the retention rate three, five and ten years after qualifying has dropped again in 2016 (albeit slightly). Although more teachers are joining the workforce, they are not staying in the profession as long as they once did. The biggest change over time is amongst teachers in the early stages of their career (arguably amongst the younger, more inexperienced teachers). After just three years of teaching, 74 per cent of teachers were retained in 2016 compared with 80 per cent in 2011. This means around a quarter of teachers now leave the profession after only three years. The reasons could relate to ‘push’ factors associated with the experience of being a teacher, or ‘pull’ factors from outside of the sector, or a mixture of both.

Figure 7: A quarter of teachers leave after just three years

Although the drop in retention rates is relatively small, there has been a steady downward trend. The cumulative impact of more difficult conditions for retention could develop into an increasing problem for the sector.

There are considerable challenges ahead

To summarise, increasing pupil numbers mean that more teachers will be needed in future, particularly in secondary schools. The number of teachers who leave the secondary school workforce each year has increased, which makes the task of replacing them, and expanding the pipeline, that much harder.

There are different ways of filling the gaps that emerge. One way is training new teachers, but the numbers entering ITT and the profession as NQTs will need to increase to meet the system’s needs. Another way is to encourage even more former teachers to re-enter the workforce so that the increase in returners continues. Finally, more could be done to retain teachers in the profession for longer, reducing the number that need to be replaced.

Our review of today’s new statistics has given a system-wide overview of the workforce risks, with some particular issues identified for secondary schools. But of course the risks could be much higher or lower in certain contexts, such as different geographical areas, school types, or subjects. NFER will continue to look closely at this data to investigate the detail behind this overall system-level picture.