This morning the Department for Education (DfE) published new analyses of the teacher workforce, which covers a range of topics including subject training for non-specialist teachers, the characteristics of returning teachers and further detailed analysis of teacher entrants and leavers. In this blog, NFER School Workforce Lead Jack Worth looks at what the data available in a new DfE analysis tool tells about early-career teacher retention.

One of the most interesting outputs released is a new app that enables regular users to do the kind of detailed analysis that has thus far been restricted to professional researchers, such as my team at NFER, which enables us to analyse teacher retention in detail, looking at different subjects and regions. The Entrants, Leavers and Retention Statistics Tool is an important step forward for opening up access to detailed data, and to a wider audience, which is a great improvement. Well done to DfE.

In June each year, the DfE publishes a table on early-career retention rates (Table 8 here). As we reported in June, the latest data shows that early-career teacher retention rates have been falling in recent years. However, the standard table previously available did not provide a breakdown by different teacher or school characteristics, which would enable a deeper understanding of where there are particular issues. The new app does.

Given the current intense policy interest in what to do to improve retention of early-career teachers, providing this detailed data is a timely addition to that discussion. Here are some of the highlights from this new information:

In May last year, we published one of the first analyses of teacher retention rates by subject, which highlighted the lower-than-average retention rates among maths, science and modern foreign language teachers, especially early in their careers.

The data published by the DfE today confirms the patterns we found. The chart below shows the retention rates of the 2010 cohort of newly qualified secondary teachers, measured by their continued presence in state sector teaching over time. The new app enables users to split the analysis by subject: here is the split by English Baccalaureate (EBacc) subjects. The data confirms our finding that maths, science and modern foreign languages (MFL) teachers have lower early-career retention rates than other subjects, while history and geography have the highest retention rates.

Early-career retention rates are lower for maths, science and MFL teachers than other subjects 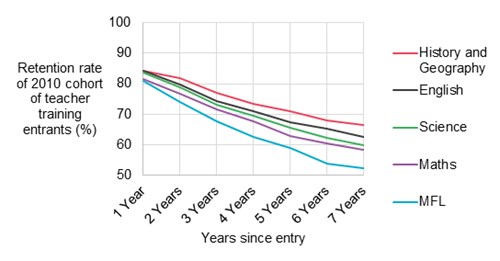 These shortage subjects attract the highest up-front training bursaries of up to £30,000, yet have the lowest retention rates. This isn’t necessarily evidence that bursaries are operating ineffectively, as retention rates may well have been even lower in the absence of bursaries. Indeed, bursaries are mostly aimed at increasing recruitment into training, but retention rates are an important factor in whether they represent value for money, given that the ultimate goal of recruiting more trainees is that more of them will eventually become teachers.

The Public Accounts Committee may feel slightly underwhelmed that this publication and data release, trailed as an evaluation of bursaries, does not address this question directly. The DfE spends more than £150m on bursaries every year, but the new analysis does not bring us much closer to understanding the extent to which they represent the best value for money.

Nonetheless, DfE has made important policy moves to restructure bursaries towards incentivising early-career retention (as we recommended last May). Previously up-front bursary payments had no link to whether or not the trainee stayed in, or even entered, the profession. Restructuring them may address more directly the issue of low early-career retention in these shortage subjects. Phased bursaries for maths trainees and student loan repayments for early-career science and MFL teachers are therefore promising developments.

Retention rates are lower in London

In May this year, we published a comprehensive analysis of London’s teacher labour market, in collaboration with the Greater London Authority. Our analysis showed that while London is an attractive place for young teachers to train and begin their teaching career, London teachers have higher leaving rates and lower early-career retention rates than elsewhere. High housing costs in London seem to be a leading factor explaining the particular difficulties London’s teacher labour market is facing.

The DfE app released today also allows users to explore the early-career retention data by region. The data confirms the patterns we identified in our research: the 2010 cohort of trainees entering teaching in London have much lower retention rates than teachers in other regions. 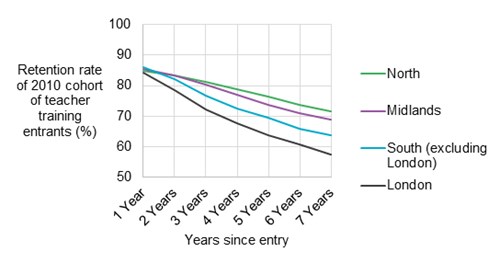 Similar to recent discussions about the pros and cons of differentiated pay by subject, differences in early-career retention rates between regions may be driven to some extent by better-paid outside options. The School Teachers’ Review Body (STRB) picked up on this issue in its recent analysis (paragraph 2.40 here), noting that the pay among other graduate professionals is higher in the South than it is in the Midlands and the North. The London bandings within the national pay structure provide some degree of pay differentiation, but the STRB has suggested that “the differentials between these bandings [may] need to be reviewed”. Our report on London’s teachers also recommended that this be looked at further.

The DfE’s new app provides data on teacher recruitment and retention in greater detail than has been generally available before, and makes it more accessible to a wider range of interested users. It provides some of the raw material necessary for a more informed debate about how to improve the retention of early-career teachers, which is a critical issue for current and future teacher supply.

For more on NFER’s research and insights in the school workforce area, visit this page.