Parents are in the dark about careers enlightenment for their children

What did your child do at school today? An age old question that any parent will tell you is difficult to get an answer to at the best of times. In my house, I might achieve a grunt of ‘maths’ from my son, and perhaps a bit more of a detailed explanation of the latest graphics project from my daughter. But I don’t think any of my children ever came home and told me ‘we did careers education today mum and I’m interested in finding out more about working in business because that’s where my skills and interests lie!’

Therefore it is of limited surprise that when NFER surveyed parents last year, we found a worrying proportion unable to clearly state whether they felt satisfied with the careers education and guidance received by their child.

The survey asked parents the extent to which they agree with the statement ‘I am satisfied with the careers education and guidance received by my child/children’. The results showed that whilst around half were satisfied, and only 14 per cent dissatisfied, the remainder (34 per cent) felt unable to give a clear answer, i.e. they either chose the middle option on the scale – neither agree or disagree – or they said they didn’t know. 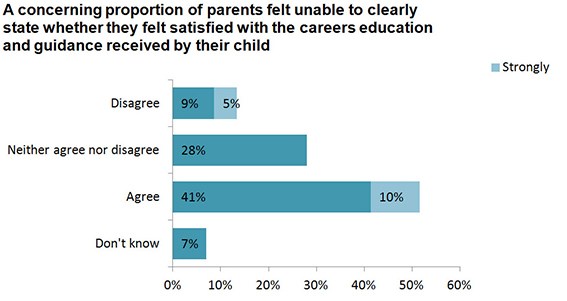 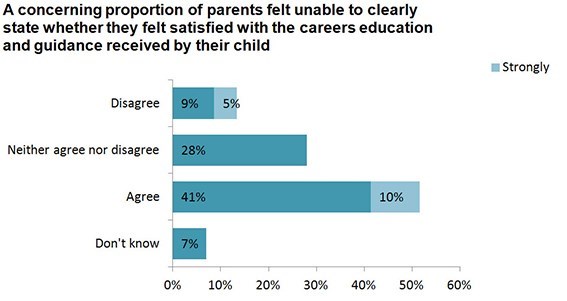 This finding is important because until young people are more practised in their career exploration skills and, for example, have a clearer sense of themselves, know their own strengths and weaknesses and can align their skills, values and interests to different potential pathways, they will not be able to make the most of any future careers advice and guidance they receive.

In 2013 I wrote an NFER Thinks paper that endorsed the National Careers Council’s call for a culture change in careers provision. I argued that part of the culture change is the need to have a coherent career strategy, starting with sound careers education and the development of exploration skills at key stage 3 (or ideally at key stage 2). This knowledge and the skills developed provide a foundation on which careers advice and guidance can build.

More recently, I have been compiling and summarising evidence in response to a careers advice inquiry being held by a new parliamentary committee, formed to look at education, skills and the economy. In my response, I conclude that there is considerable robust evidence that suggests that quality careers advice provision would benefit from an equal focus on first laying the foundations with careers education and ensuring that parents are well-informed in terms of the careers education and guidance their children are receiving.