By guest blogger Andrew Morris, education consultant and member of the Learning and Skills Research Network

These and many other fascinating initiatives formed the raw material at a Learning and Skills Research Network workshop last month. Practitioners from colleges, universities, adult education and offender learning centres joined with other specialists to develop thinking about the use of research in FE.

The under-use of research in developing practice and policy is a global trend, experienced in many branches of public service in many countries. Post-16 education in the UK is no exception. In recent years the ways in which research actually gets used in practice have begun to be studied. As a result we are now aware of key factors in using evidence effectively. For example an OECD study highlighted the value of third-party brokers acting between researchers and research-users and a study for LSDA emphasised the importance of communicating research outcomes in different modes for different audiences.

The evidence about evidence
A 2014 study from NFER formed a useful starting point for the workshop. Reviewing research about using evidence at classroom level, Julie Nelson, one of its authors, emphasised that:

1. Research evidence is one of several contributors to evidence-informed practice.
2. Professional researchers, practitioner-researchers and practitioners in general each have roles to play in the effective use of evidence at classroom level.
3. Both practitioner enquiry at local level and academic research are needed if actual practices are to be influenced by high-quality evidence. They make different contributions to the research ecosystem and potentially there can be synergy between the two as the following diagram illustrates: 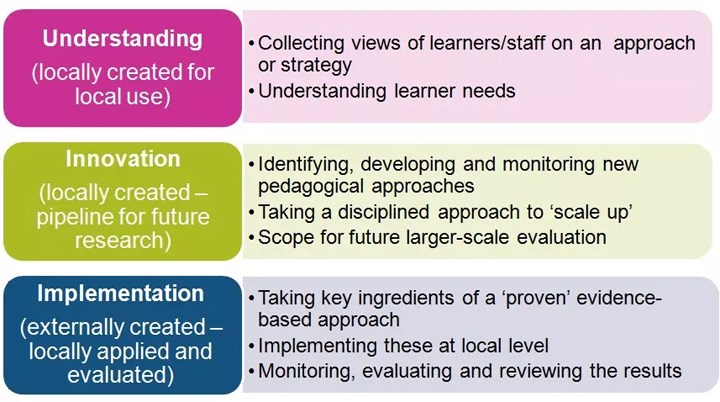 4. Changes are needed at system level if evidence is to be used effectively in shaping practice. Academic research and practitioner enquiry need to work together in complementary ways to ensure that practice innovations feed the research cycle, and that the research cycle feeds practice.

Practical suggestions
By sharing experiences of using research evidence and subsequently pulling out the main messages, the workshop produced a number of ideas about what can be done to encourage and support greater use of research evidence.

A broad message was ‘let’s stop waiting for initiatives from government or its agencies’; very few still exist and policy has shifted anyway towards self-help. In the same vein, participants were keen to ‘stop just counting beans’. Data is being collected as never before; can we think about its potential for generating useful knowledge about teaching and learning as well as for accountability? Combining it with other data from, for example, UCAS, Ofsted, the census and longitudinal cohort studies, is an exciting possibility which the new BIS VET Research Centre is intending to take up.

On the practical side a plethora of suggestions was offered, each tuned to classroom realities. “Just make a start, decide what knowledge you need, then frame your enquiry accordingly,” said one. “If you’re armed with evidence of your own and from the pubic evidence base you have a better chance of getting buy-in,” commented another, in reference to gaining internal approval. A senior leader at the workshop encouraged evidence-users to know their stance – where to give way and what to stand firm on. But bear in mind when advocating an evidence-informed change that there’s usually some uncertainty around the outcome of research (if there weren’t, would it be necessary to do the research?), and this needs to be openly acknowledged as it can present risks for a hard-pressed budget-holder.

Where organisations are now beginning to use research evidence, time and space is being freed up for professional development. To achieve this, it helps to build on existing structures such as CPD days, and to address acknowledged problems in the institution, perhaps using existing data. Where the idea of ‘research’ is perceived as ‘not for the likes of us’, it may be better to use the concept of ‘practitioner enquiry’ to overcome suspicions about the word.

Examples of evidence being put to good use abound in FE. Transforming the initial assessment of literacy and numeracy skills is a hot topic at Barking & Dagenham College; introducing tutors to action research is happening at HMP Dovegate; and creating a model of professional development based on the new professional standards is the aim of a project at the Adult Community College in Thurrock.

A key conclusion of the workshop was that whichever approaches are adopted for using evidence to transform practice, they need to be tailored to suit local circumstances; there are no standard approaches. ‘No silver bullet’, as one wag put it, ‘maybe silver pellets’.