Retaining teachers in Wales – what do we know?

By Jack Worth and Jennifer Garry

As we have previously reported, government statistics show that retaining working age teachers in England appears to have been getting more difficult, while our latest survey data suggests this trend may now be reversing. Last month the Education Select Committee published a report on teacher recruitment and retention in England, urging the Government to “place greater emphasis on retaining teachers and not just focus on the necessary task of recruiting new teachers”. But what do we know about teachers in Wales?

The number of teachers leaving is fairly stable

Statistics published by the Welsh Government show that the proportion of teachers leaving the profession (excluding those retiring) in Wales has increased very slightly in recent years. Since 2012, the leaving rate has remained at around three per cent per year for both primary and secondary schools.

This finding is in stark contrast to England, where teachers have been leaving the profession (and not retiring) at a higher rate, and where the rate has increased more rapidly in recent years. In 2015, the proportion of teachers leaving the profession in England (7.8% primary, 8.1% secondary) was more than two times higher than in Wales (2.8% primary, 3.2% secondary) at both the primary and secondary level. Our latest survey data shows that the proportion of teachers that are considering leaving the profession fell significantly between autumn 2015 and autumn 2016, which suggests that the retention figures may show an improvement when they are published in July 2018.

However, comparisons between the teaching workforce in England and Wales must be made with caution due to the different methodologies used to collect the data. Unlike the school workforce census in England, there is currently no single collection of individual-level teacher data in Wales. The data published by Stats Wales presents limited information gathered from a range of inconsistent data collections and surveys. Although the data provides an interesting insight into the teaching workforce in Wales, it does not allow scope for detailed analysis and reliable comparisons to be drawn.

England appears to have a higher proportion of teachers leaving the profession than Wales, but the poorer-quality Welsh data may be giving an inconsistent picture

The majority of advertised roles are being filled 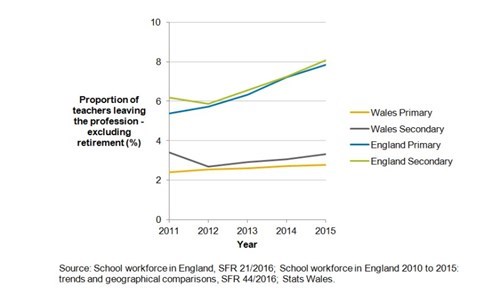 Despite a smaller proportion of teachers leaving in Wales, replacing those that do leave remains important for maintaining the ratio of teachers to pupils in Wales. The Welsh Government’s teacher recruitment statistics show that the majority of vacant roles are being successfully filled. However, between 2011 and 2015, the proportion of positions left vacant increased by three percentage points at primary level and four percentage points at the secondary level. 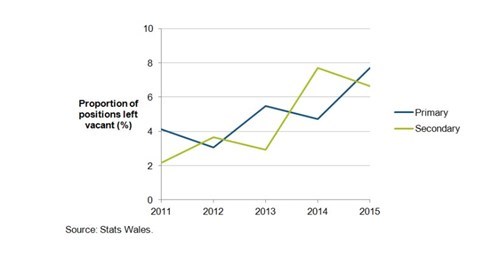 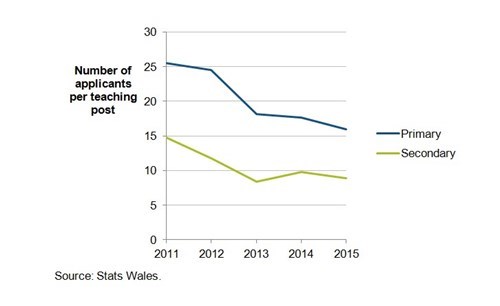 This market tightening, coupled with roles going unfilled despite the large number of applicants, suggests that the quality of applicants may not be wholly suitable to meet schools’ demands. Moreover, the ability to fill vacant positions is likely to vary greatly by subject, area, school or role. While some positions will be over-subscribed, it is likely that schools in less favourable areas will be struggling to attract sufficient numbers of suitable applicants. For example, that data shows a relatively high proportion of physics, chemistry, biology, mathematics and English roles are left vacant compared to other subjects.

Comparisons cannot be drawn with England in this instance, as data on the number of roles advertised, applicants received and teachers appointed is not collected.

Wales and England both face their own challenges

Wales and England both face challenges in meeting the demand for teachers in the next few years. According to future pupil demographics, the number of school aged children is expected to grow by four per cent in Wales and 15 per cent in England by 2025. In each country the teaching population must keep up in order to prevent a teacher shortage.

Although the projected rise in pupil numbers is significantly lower in Wales than England, a tough challenge remains ahead for Wales. Whilst pupil numbers have remained relatively flat in recent years, teacher numbers have been declining for nearly a decade. In 2016, the number of teachers in Wales was six per cent smaller than in 2007. While teacher supply appears to be meeting pupil demand for now, this may not be the case for much longer. With pupil numbers set to rise modestly in coming years, the trend of declining teacher numbers must be reversed.

The number of teachers in Wales has been falling, while the number of pupils is expected to grow modestly in the coming years 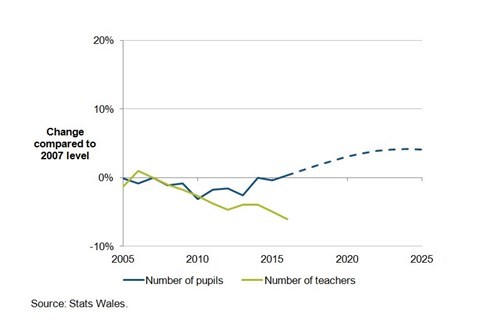 The number of teachers in England has kept pace with pupil numbers, but the number of pupils is expected to grow rapidly in the coming years 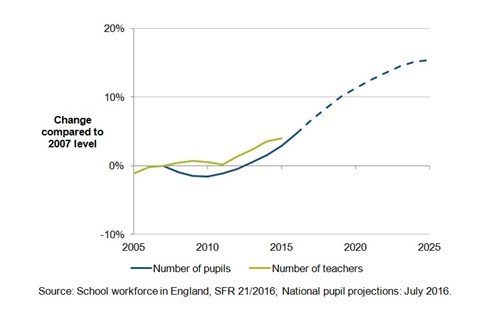 A school workforce census for Wales?

The Welsh Government recently proposed to replace its existing school workforce collections with an annual individual-level school workforce census, similar to the one that currently takes place each year in England. NFER welcomes this proposal as it will allow greater insight into the teaching workforce in Wales, enable better workforce planning and allow for trends to be carefully monitored over time and cross-country comparisons to be made more accurately.