School Workforce in England: is the ‘perfect storm’ subsiding?

The latest data on the teacher workforce in England published yesterday by the Department for Education (DfE) shows that despite leaver rates decreasing, there is still much to do to address the teacher supply challenge facing the profession, especially in the secondary sector.

Despite the number of secondary pupils rising for the fourth straight year, the number of secondary teachers has declined again this year, as it has done each successive year since 2012. Recruitment to teacher training in secondary has been below target for six years in a row, which points towards teacher shortages as the key reason why class sizes and pupil-teacher ratios are rising.

The average class size in secondary schools has risen from 20.5 in 2010 to 21.7 now. The proportion of pupils in classes of more than 30 has risen from 10.2 per cent in 2010 to 13.0 per cent today. Squeezes on school budgets compelling schools to rationalise their staffing models may have also contributed to falling teacher numbers and rising class sizes.

Yesterday’s data does highlight some signs of teacher shortages. School vacancies and temporarily-filled posts are measured in November each year. November is an unusual time for a school to have a vacancy unless it is having difficulty filling the vacancy, so the measure provides a proxy for difficulties recruiting teachers across the system. The current secondary vacancy rate is 1.0 per cent, compared to 0.4 per cent in 2010. Vacancies for maths and science teachers, the subjects that have seen the greatest under-recruitment to initial teacher training compared to what is needed to meet demand, are both well above the secondary average.

While this still means that water is pouring out of the ‘leaky bucket’, at least one or two of the holes seem to have been plugged. Continued efforts to plug more holes is still needed as the growth in secondary pupil numbers demands that the entrant rate be far higher than the leaving rate. The number of teachers returning to the state sector, a potential source of teachers to fill supply gaps caused by under-recruitment to teacher training, has not risen to meet supply needs. 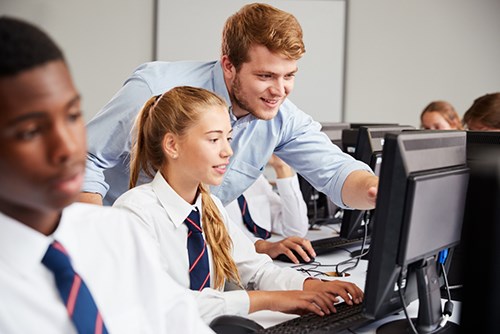 Beneath the overall trends of teachers leaving the profession there has been an important shift: fewer teachers have been retiring and more working-age teachers leaving. In 2010, one in three of all the teachers who left were retiring, whereas now it is one in six. The system is losing teachers earlier in their careers, before they reach retirement age. Data from OECD’s Teaching and Learning International Study (TALIS) survey, published last week, showed that England has one of the youngest and least experienced teacher workforces among industrialised countries.

The retention rate of early-career teachers has also been falling and this trend has continued this year. As of this year, 77 per cent of state-sector entrants were still in the profession after two years compared to 83 per cent in 2011, while in 2018 only 68 per cent remained in the profession after five years compared to 73 per cent in 2011. Many teachers are leaving just after they have trained and begun to develop expertise in classroom practice represents a significant loss for the system, both in terms of cost and talent.

What impact has DfE’s recruitment and retention strategy had?

In January, the DfE published its teacher recruitment and retention strategy.

Yesterday’s school workforce data was obviously collected before the strategy was published, and the data on teachers leaving is based on teachers who decided to leave 18 months ago. It is therefore too early to say what its impact has been, but the fact that fewer teachers are leaving suggests that efforts to improve retention that pre-dated the strategy may be bearing fruit.

Also, although the strategy set out a direction, the policy implementation is largely still to come. For example, the Early Career Framework, the strategy’s centrepiece, won’t be rolled out nationally until 2021. There is also a clear need to improve teachers’ working conditions but actions on this will take time to implement and have an impact.

This latest data is a reminder of the pressing challenge the system is facing over the coming years. Teacher recruitment and retention will need to remain a top priority for the Secretary of State.