Stronger by working together: Lessons on what makes for effective collaboration between schools in Wales

Allowing practitioners to design and lead change in the school system is increasingly the way that successful systems across the world are approaching educational reform. This trend is evident in Wales where policymakers are looking to harness the talent and enthusiasm that exists in schools to bring about a radical transformation of the way the education system works and an improvement in learner outcomes. This is regarded as essential if pupils in Wales are to fulfil their potential. It is also key to Wales’ effort to overcome disappointing outcomes, for example in recent PISA tests.

Two key principles underpin the approaches that are being developed by policymakers in Wales. First, the knowledge and expertise that Wales requires on its transformation journey rests with teachers and school leaders. Second, the fairly cohesive nature of the Welsh education system and the way it is premised on collaboration rather than competition as the way to raise standards means that the country’s practitioners should be well-placed to work together.

Evidence is emerging about how expertise which exists within the system can be harnessed as a way of improving practice at school level. NFER’s work evaluating the Lead and Emerging Practitioner Pathfinder Projects (Tranche 1 in 2014 and Tranche 2 in 2015) is part of that nascent body of knowledge. We conducted an extensive programme of field visits to around sixty schools that were working in partnership to examine their experiences of working together, the focus of their work, and the impact it was having at a whole-school level, on teachers and school leaders, and on learners. 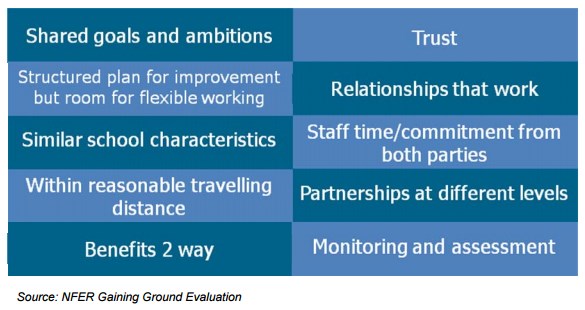 Similar features were present during the Lead and Emerging Practitioner Pathfinder Project, although the findings from the Pathfinder also served to reiterate the importance of the working practices that schools adopt, which can act as enablers or barriers, as shown in Table 1. 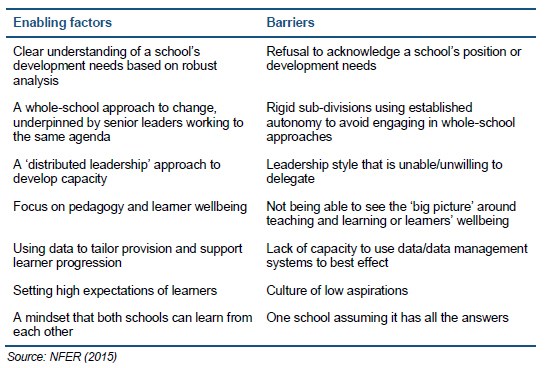 Our research into school-to-school partnership working in Wales also highlighted the importance of emotional intelligence, where all of those involved in the work nurtured a positive mindset and recognised each other’s professionalism. It was necessary for those involved in the work to take account of the distinctive context of each school. Even where schools were relatively similar in terms of socio-economic characteristics, factors such as current and historic leadership cultures, reputational issues and working relationships needed to be borne in mind when embarking on a collaborative journey.

What did not work was an approach based on transferring practice directly from one school to another, or where school leaders assumed that what worked in their school would be effective practice elsewhere. Instead, effective partnerships were characterised by a shared aim to achieve excellence, where practitioners at all levels (be they school leaders, teachers, or teaching assistants) were willing to take part and were convinced of the need for change, and where both schools believed they could learn from each other. This enabled them to consider how practice could best be tailored to meet the context of each individual school and to address the distinctive circumstances facing each one.

On a practical level, it is clear that issues such as location influence the extent to which schools are able to work together, suggesting that in general they should not be more than 45 minutes’ travelling time from each other.

At its best, the practice that was observed across the participating schools showed what needs to be in place if schools are to work together effectively. A future blog post will describe the resulting activities and how these have contributed to school improvement. The challenge for the future will be to develop the capacity of the system as a whole so that it can make the most of the exciting possibilities offered by a profession-led model to bring about deep and lasting change in the way Wales’ education system works, and enables learners to fulfil their potential.