Taking a look behind this year’s headline A level results

By Chris Dixon and Maire Williams

Thursday saw the release of A level results in England; congratulations to all those who got their results!

This year’s results follow a period of considerable change to the structure and content of examinations in England, with a view to making these exams more rigorous. [1] Overall, to date, these changes have been associated with a reduction in the percentage of males and females achieving top grades.

Males have outperformed females for the second year running, achieving a higher share of A*s and As.

Last year’s results, when 13 subjects were reformed, coincided with the end of the long-term trend of females achieving a higher percentage of A*s and As than males. It is interesting to see that males have maintained the overall advantage this year, with 26.4 percent of grades achieved by males being top grades versus 26.0 percent for females. Although the gap between the genders remains, it has closed somewhat this year (by 0.4 percentage points). This has been driven by both the reversal of the slow but steady long-term decline in female performance and a slight drop in males’ performance since last year. Overall, the total share of top grades has remained the same this year as last year, at 26.2 percent.

In the non-reformed subjects, males continue to perform better than females, with 34.5 per cent of grades achieved by males being A*s or As, versus 32.6 per cent of females.

In the 21 reformed subjects (i.e. the 13 subjects examined for the first time in 2017 and the eight examined for the first time in 2018), females have historically performed better than males (Figure 1). This trend has continued, with the gap widening slightly this year (from 1.3 to 1.6 percentage points in favour of females). This has been driven by a drop of 0.6 percentage points in males performance compared to last year.

Figure 1: In the 21 reformed subjects, females continue to achieve more top grades (As and A*s) than males, and the gap has grown 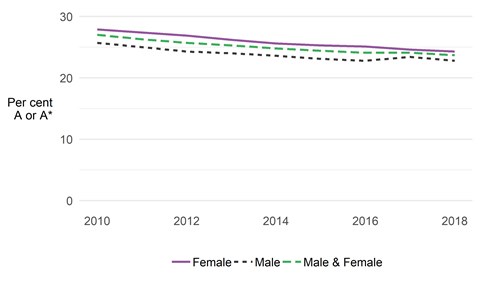 If we compare performance only in the 13 reformed subjects that were examined for the first time in 2017, we see that the proportion achieving top grades has remained broadly stable. (Figure 2). Yet in a reversal of last year’s results, males have seen a fall in their performance, while females performance has actually improved very slightly, indicating that the initial advantage males gained from last year’s reforms was short-lived.

Figure 2: The share of A*s and As achieved in the 13 reformed subjects examined for the first time in 2017 has remained stable 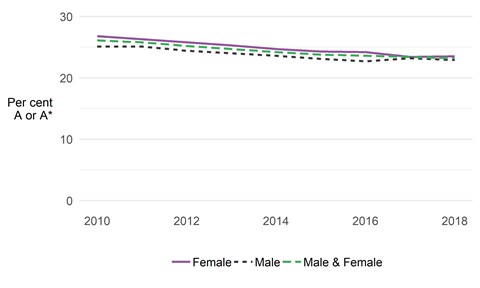 Looking only at the reformed subjects that were examined for the first time in 2018, (Figure 3), the proportion of top grades has dropped for both males and females (by 1.8 and 1.0 percentage points, respectively). Given that last year’s headlines focused on males benefiting from the reforms, possibly due to the reduction in coursework, it is interesting to see that this year males performance in the newly reformed subjects has dropped more than females. One explanation for this could be the types of subject that were reformed in each year. The reformed subjects examined in 2017 included Biology, Chemistry, Physics and Computer Science, while those examined for the first time in 2018 included Physical Education and performance arts, such as Dance and Drama. As such, the 2018 subjects remain less reliant on the final exam, as they include marks for performance elements.

Figure 3: The share of A*s and As achieved in the 8 reformed subjects examined for the first time this year has fallen 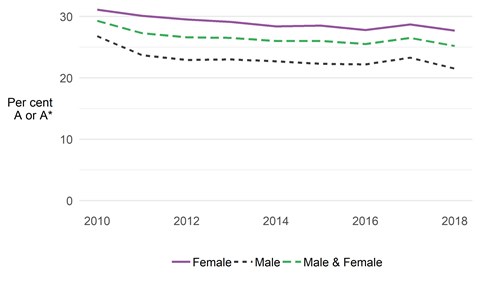 Overall, the slight drop in A*s and As achieved in the newly reformed subjects demonstrates the challenge teachers face when exam methods and subject content change, along with the disadvantage this can place on the first cohort to go through the changes. As students and teachers become more familiar with the changes to these eight subjects, we would expect performance to begin to rise. This year results also indicate that the improvement in males’ performance isn’t in fact being driven by the reforms – males are performing better in the non-reformed subjects but worse in the reformed subjects. It is currently hard to pinpoint exactly what is driving the improvement in males achievement, so it will be interesting to see if males are able to outperform females again next year, and what effect the further scheduled reforms will have on both sexes.

[1] In 2013, the Coalition government announced these reforms would include a review and update of subject content, a change from exams throughout the two year course to exams only at the end of the course, and a reduction in the number of subjects available. This reform is currently taking place in three phases, with 13 reformed subjects assessed for the first time in 2017 (phase 1), eight subjects in 2018 (phase 2), and a further 18 subjects in 2019 (phase 3).