Teacher training applications up by 42%

In our last blog post on postgraduate initial teacher training (ITT) applications in England and Wales, we found that the 2020 boom, likely caused by the COVID-19 pandemic and ensuing economic fallout, seemed to be continuing into the new 2021 application cycle.

This rise was evident despite data from the new Department for Education (DfE) ITT application service being unavailable, meaning UCAS data undercounted the number of applications made to providers in the country.

New UCAS data was released yesterday, representing applications up to mid-December 2020, and including numbers from the DfE system, so gives a much more complete view of the state of recruitment.

The ITT application boom in England has continued

The new data suggests that the application surge since the early summer of 2020 has continued into this year, with the number of applications 42 per cent higher than the same time last year. This increase is evenly spread across primary and secondary phases.

December marks the eighth consecutive month in which ITT application numbers have been higher than the previous cycle. The pandemic-induced uncertainty in the wider labour market has made the relative security of a teaching career an attractive option for graduates of all ages, which is good news for teacher supply in England after years of under-recruitment.

The early-cycle application dip in Wales seems to have reversed

The last set of UCAS data indicated that applications to Welsh providers up to mid-November 2020 were 18 per cent lower than the previous year. This was puzzling and potentially concerning, as we would have expected to see the same recession-related surge and also, unlike in England, the Welsh Government had left training bursary amounts unchanged from the previous year. The December data suggests that this dip may have just been a slow start, as the number of applications to Welsh providers by mid-December 2020 were 10 per cent higher than the previous year. However, this gain is still relatively small compared to England, and so continues to warrant further review as we move through the application cycle.

In our previous post, we discussed how the DfE, changed the value of bursaries available to prospective ITT applicants in the 2020/21 cycle, in part to reduce demand for placements in subjects which had over-recruited in the previous year and could over-recruit again in the absence of any policy change. Subjects experiencing the biggest reductions included biology, classics and modern foreign languages, which each saw bursaries shrink by more than £15,000.

With the newest wave of UCAS data, we can also explore whether bursary reductions are associated with a reduction in demand for over-recruiting subjects. 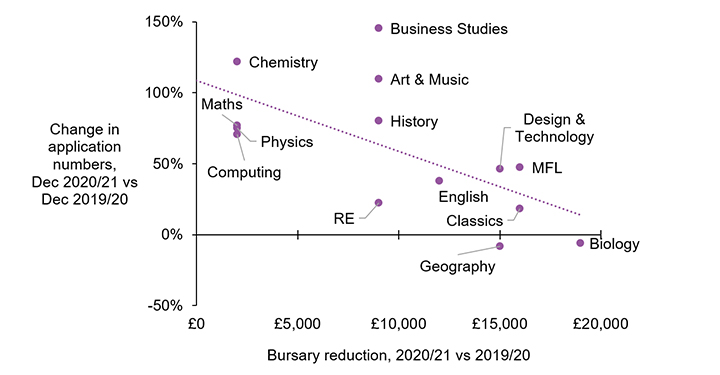 The downward sloping line-of-best-fit suggests this may indeed be the case. Applications to biology, geography and classics were virtually unchanged compared to the previous cycle, despite the overall increase in the number of applications. On the other end of the scale, chemistry, maths, computing and physics, which experienced the smallest bursary reductions, tended to have some of the highest increases in applications. However, clearly other factors may also have influenced the increase/reduction in applications in some fields, for example, one might hypothesise that the demand for biology graduates across the labour market will have increased due to the pandemic, for example. Nevertheless, the data, suggest that bursaries appear to be an effective tool for driving recruitment, and it is particularly encouraging that the overall application surge appears to be concentrated on shortage subjects.

The results suggest that the bursary changes have had the effect desired by the DfE: reducing demand for ITT placements in subjects that would have otherwise over-recruited. Combined with the COVID-19-induced application surge, this seems to have translated to a boost in applications to subjects with higher recruiting challenges and saved a substantial sum of public money that would have been spent on bursaries for subjects with already sufficient recruitment levels at the same time. This is of heightened importance in light of the increased public spending deficit due to the pandemic response.

It remains to be seen whether the application surge continues to hold up throughout the rest of the cycle and how it will begin to translate to more offers and course places later in the year. We may very well be observing a temporary uptick of applicants from prospective trainees seeking to guarantee their placement as early as possible in light of ongoing challenging labour market conditions, or due to not having received a placement in the previous cycle. If this is the case, application numbers may not continue to rise throughout the rest of the year. Future UCAS data releases should help shed some light on these outstanding questions in the months to come, particularly as the data now includes application figures from the DfE application service and is comparable across time.

Dawson McLean is an Economist at NFER