The ups and downs of teacher recruitment

Teacher recruitment has been a widely reported and challenging issue for the education sector for some time. The Government has responded by running recruitment campaigns and offering financial incentives to attract new trainee teachers. The latest Initial Teacher Training performance statistics for the 2015/16 academic year, released today, show a small increase in the total number of trainees for the first time since 2009/10. In part, this is because Teach First trainees have been included, but even excluding these figures a small increase remains. Coming at a time when more teachers are needed in the next ten years to cope with the large projected increase in pupil numbers, this increase looks promising. Yet, due to the longer-term trend, the number of trainees (including Teach First trainees) remains 13 per cent lower today than it was in 2009/10.

The number of new trainees has risen over the past year, but remains 13 per cent lower than in 2009/10 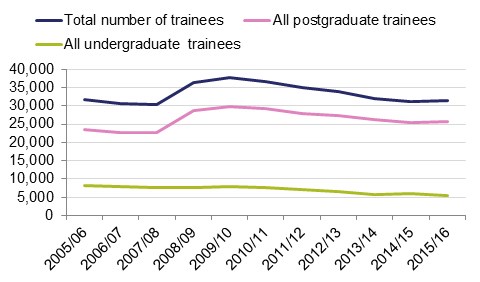 Source: Initial Teacher Training performance profiles, Department for Education. Teach First figures have been excluded from the year 2015/16 to allow for comparisons with earlier years

The good news is that the share of new trainees achieving Qualified Teacher Status (QTS) (including Teach First figures) has remained high and broadly stable at 91 per cent, and has even increased very slightly over the last three years. The share of newly qualified teachers employed as a teacher six months after qualifying (also including teach first figures) is performing similarly well, currently standing at 95 per cent. But the subjects known to be experiencing a long-term shortage of teachers, namely Physics, Chemistry and Maths, stand out as having lower shares of trainees achieving QTS, at 85, 87 and 89 per cent respectively. When combined with the fact that recruitment of new trainees for these subjects once again did not meet the targets, this figure becomes more worrying.

Following policy pushes to encourage schools to be more involved in training, the proportion of postgraduates training through a school-based route has increased by more than 15 percentage points over just the last two years, meaning that for the first time nearly half (49 per cent) are training this way. When Teach First figures are included this rises to 52 per cent. While this change was geared to improving the quality of training, the latest data shows that in terms of the share of trainees achieving QTS and the share in a teaching job six months after qualifying, there is little difference in the success rates between those going through a school led route compared to a higher education institute led route. However, we do not yet have the data to know if differences in the share remaining in teaching emerge in the longer term. 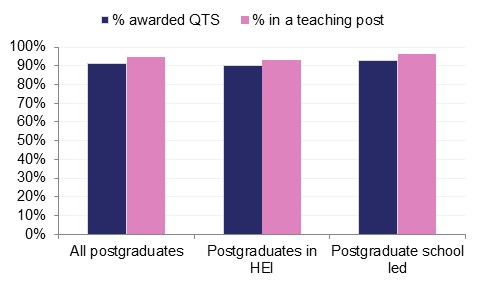 The qualification level of postgraduate trainees has also been increasing. Today’s data shows that the share of those with a first class degree has more than doubled since 2005/6, increasing from 8 per cent to 18 per cent in 2015/16 (including teach first figures). Similarly, over the same time period, the share holding a first-class or a 2:1 degree has risen from 59 per cent to 74 per cent (including Teach First figures).

Trainee teacher are increasingly holding a higher class of degree 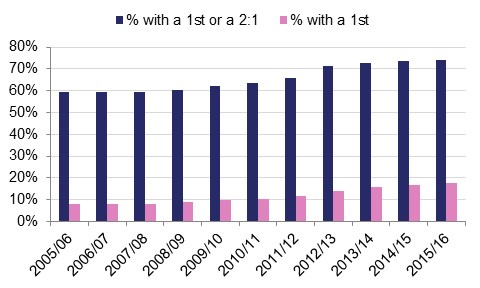 This change is likely to be due to a number of factors. There has been a Government push to encourage graduates with top degrees into teaching due to their greater subject knowledge. This includes, for some subjects, only providing Government funding for trainees with at least a second-class degree and only offering bursaries to those holding a 2:1 or better. Trainees also now need to pass literacy and numeracy tests before they are offered a place on a training programme, instead of at the end of the course, filtering out those with weaker skills. The increase in trainee teachers holding a 2:1 degree or higher is also similar to the increase seen in the broader graduate population, suggesting this increase in qualification level is not unique to the trainee teacher population.

While this increase in previous attainment is good in that those with a first or 2:1 degree are more likely to achieve QTS, previous work has shown degree class is not necessarily correlated with being a good teacher, as a teacher also needs to be able to engage pupils and clearly explain their subject matter.

As NFER research has shown, as well as long running issues with recruitment, schools are also experiencing issues with teacher retention, with around a quarter of teachers now leaving the profession after only three years. The recent findings of the School Teachers’ Review Body state that average starting salaries and opportunities for pay progression remain lower for teaching than for many other graduate professions. This adds to the concerns around retention, as does the decision to cap teacher pay rises at 1 per cent. Both these measures limit the ability of the teaching profession to compete in the graduate labour market, indicating the pattern of recruitment and retention difficulties is likely to remain a key education policy challenge in the years to come.