By Claudia Sumner and Tami McCrone

With the 2017 general election in sight and all major parties preparing to release their manifestos, we look at the top education issues that all the parties should be talking about…

Following the General Election in 2015, NFER, in collaboration with Full Fact, reviewed the education promises made in the Conservative, Labour and Liberal Democrat manifestos. We also reflected on what had been omitted. We felt that the manifestos of all three main parties missed some of the wider strategic points; for example, though they talked about teacher recruitment, they failed to address teacher retention or growing pupil numbers. Crucially, we identified the vitally important areas that no-one was talking about. The number one issue on this list was young people who are not in education, employment or training (NEETs).

It was heartening to see ideas proposed in the recent Industrial Strategy Green Paper that have the potential to increase the quality of education and training provision post-16, including technical routes and vocational qualifications. But there will almost certainly remain a cohort of young people, often with complex barriers to learning or employment, who get left behind. It is important that all political parties maintain a focus on this vulnerable group of young people and how to address their needs.

In our response to the Green Paper, NFER cautioned against easy answers and quick fixes – while the number of NEETs has fallen overall, stubborn regional disparities persist. 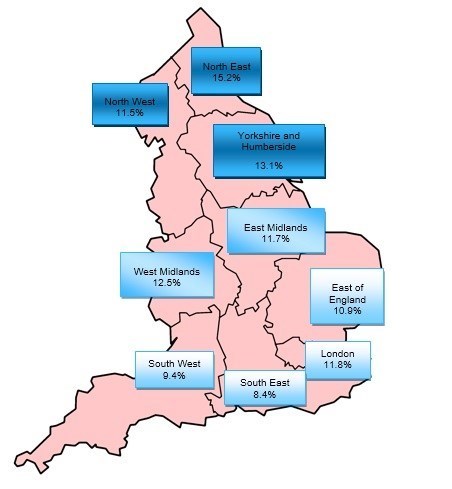 Percentage of 16-24 year olds not in education, employment or training by region (fourth quarter 2016)

One of the proposals highlighted in the Green Paper is a new ‘transition year’ for the over 16s (first mooted in the Post-16 Skills Plan in 2016), which intends to reduce the number of NEETs by, ‘providing intensive support in basic skills for those who need it most’. Although, NFER research suggests earlier interventions may be more effective in preventing young people falling into NEET-hood. If an additional year can be effectively deployed to support those most in need of further developing their skills range; including raising their levels of literacy and numeracy to engage them in training and provide them with the skills valued by employers, it is to be encouraged. It has the potential to be an interesting and valuable idea, but only if is properly explained, supported and resourced.

A positive narrative needs to be developed that presents the ‘transition year’ as an opportunity to those involved; it must be carefully managed in order to prevent damage to young people’s self confidence and resilience. Practical consideration should be given to the location of any further study which will happen during the transition year, because this is not currently clear and it will be important to clarify this before the introduction, as the possible perception that young people will have to spend another year at school could be damaging. Many young people will need to move on from school to an environment (such as a further education college) where they can be treated like adults but will be able to access appropriate and non-judgemental additional support where needed.

In order to facilitate success, all stakeholders (parents, teachers, employers and the young ‘transitioners’ themselves) must fully understand the purpose of it and support it prior to its introduction. Furthermore, it must be situated within an improved careers guidance and advice system. The new system of technical education, including the transition year, will be greatly enhanced by the provision of effective careers education and guidance for all.

We don’t yet know what will be ‘missing’ – or indeed included – in the manifestos for the 2017 General Election. Word on the street is that they are going to be “slim-line”, so it is possible there will be gaps to fill through debate and commentary as formal campaigning gets underway. Let’s ensure that this time policies focus on all young people, including those vulnerable groups at risk of becoming NEET, and how we address their needs too.