Um, but what is an academy?

Over my past three blogs, I have explored new NFER data on school choice. I have discussed how parents believe they have a genuine choice, how this choice is often influenced by local conditions and how this varies to some extent depending on household income. One thing I haven’t dwelt on though is the impact that one of the biggest education reforms this parliament has had on choice. Namely, academy schools. 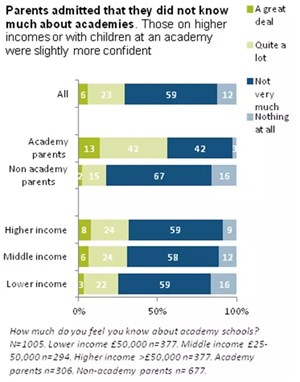 There is a wealth of evidence on the impact of academy schools, but remarkably little of it investigates policy from the point of view of parents. 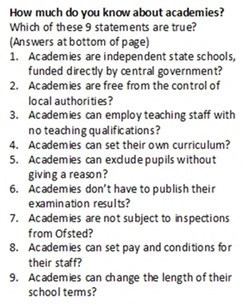 Last week in my discussion on local accountability, I highlighted how parents, first and foremost, look for local solutions to school level problems. When we checked with survey respondents who they would turn to beyond this (‘if you had a problem with a school and felt that the headteacher had not resolved it, who would you complain to’) despite nearly a third of our survey respondents having a child at an academy school, none identified the Education Funding Agency as a body they would contact – even though the EFA is the organisation responsible for handling complaints about academies. This was one of the issues picked up by the Education Select Committee in their review of academies and free schools earlier this year.

This lack of knowledge about academies is a theme reflected through much of our survey data. Parents reported that they did not know much about academy schools. Those on higher incomes or with children at an academy were slightly more confident, but not much. On average though, only 29 per cent reported that they knew ‘a great deal’ or ‘quite a lot’. As would be expected from this, parents went on to report that they would like more information about academy schools, especially those parents with children already attending an academy.

However, this wasn’t the end of our questions. We went on to pose a series of statements about academies and asked the responding parents whether they thought they were true or false (or they didn’t know).  The average respondent got four questions correct, responded ‘I don’t know’ to three of them, and got two of them wrong.

Furthermore, the detail of the test questions indicates that in some of the more controversial areas, parents do not agree with or understand all the freedoms that academy schools have. The question that most parents got wrong was ‘academies can employ teaching staff with no teaching qualifications’ (30 per cent got it wrong, 27 per cent got it right and 43 per cent admitted that they didn’t know).

So where does this leave us? Well, for parents to be able to exercise informed choice and have access to the best schools, then we need to ensure the right systems are in place from national government to the local level, and to equip and inform parents with the data and information they need.