What are we to make of the latest School Workforce statistics?

At a time when trainee targets are being missed, retaining the teachers already in the profession becomes all the more important. Teacher retention has been the focus of a programme of NFER research, including our Should I Stay or Should I Go? report last November and forthcoming research examining the experiences and intentions of teachers.

More teachers are leaving but overall teacher numbers are stable

There are some reasons to think this should not be a great concern. The leavers were replaced by even more joiners, as they have been every year since 2011, and the rate of teachers leaving is only one percentage point higher than it was four years ago. The overall number of teachers has increased again this year, suggesting that where vacancies arise they are largely being filled. 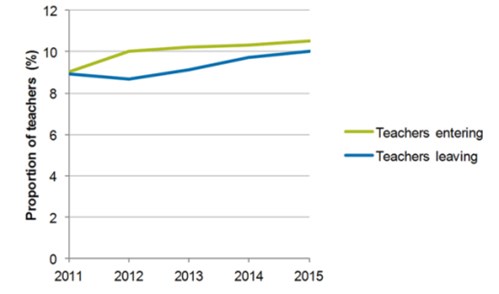 Pupil numbers are expected to grow fast in the next decade, especially in secondary schools

However, there are good reasons for thinking this situation is concerning. What the overall number of teachers and the data above on teachers joining and leaving does not tell us is anything about the level of demand for teachers. One factor that will affect teacher demand is whether pupil numbers are changing. The number of pupils has been growing over the same period, and the pupil-teacher ratio has risen, albeit marginally, from 17.8 in 2011 to 18.1 now.

However, it is secondary schools that have seen more teachers leave than join for the past two years despite pupil numbers that are growing again. The downward trend in teacher numbers will need to reverse quickly to meet the coming growth in pupil numbers. 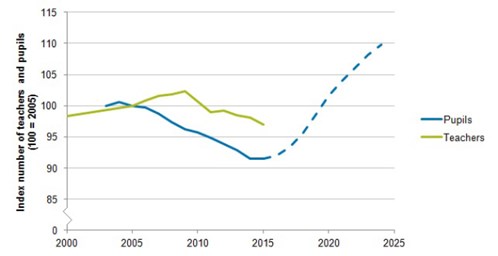 Retention of working age teachers is getting more difficult

Another concerning factor is that the proportion of teachers leaving and not retiring has increased more rapidly, from 6 per cent of teachers in 2011 to 8 per cent in 2015. Overall, this has been offset by a reduction in the number of teachers retiring, but suggests that retaining working-age teachers is becoming harder. 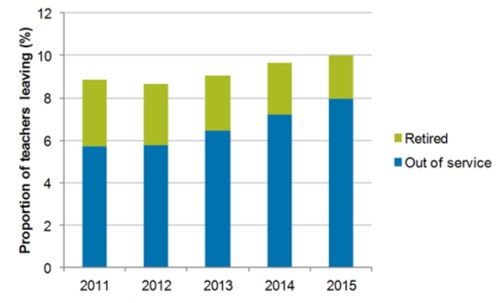 Research on the effect of wider economic conditions on teacher supply suggests the current strong situation in the labour market is bad for retention and worse for recruitment of trainees. Scotland and Wales are also reportedly experiencing problems encouraging enough new trainees into teaching, which suggests that common factors (such as the economic environment) are important as well as any factors that are unique to England (e.g. the changing system of different routes into teaching) at explaining under-recruitment.

The number of applications for teacher training soared following the 2008 financial crisis and subsequent recession. If, as many economists expect, employment prospects in the private sector deteriorate as a result of the UK leaving the European Union (or at least the uncertainty created by the referendum result), then we may yet see an increase in graduates and others entering ‘recession-proof’ teaching.  Time will tell if this offers a partial solution to the teacher supply shortage.