What’s happening to reading under the new Key Stage 2 curriculum and assessment regime?

By Jennie Harland and Claire Hodgson

The Government has today published the provisional national curriculum assessment results for Key Stage (KS) 2 for primary pupils in England. They show very encouraging increases in attainment compared with the 2016 results, with 61 per cent of pupils reaching the expected standard in reading, writing and mathematics (i.e. a scaled score of 100 or more or a teacher assessment of ‘reaching the expected standard’ or ‘working at greater depth’ in writing) in 2017 compared with 53 per cent in 2016.

As Figure 1 shows, there have also been increases in attainment in all of the individual subjects.

Figure 1: KS2 attainment by subject over time based on pupils achieving the old Level 4 standard 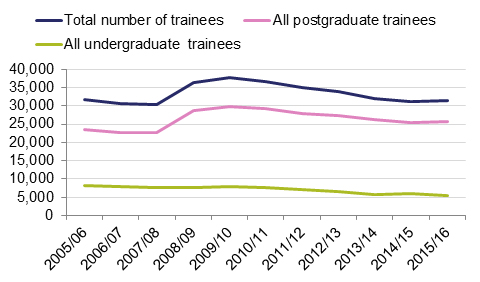 This may be a promising indication that the new curriculum and assessment regime is beginning to bed in. A new and more challenging KS1 and 2 curriculum was introduced in 2014, the previous system of assessment levels has been withdrawn, and a new suite of assessments was introduced for the first time in 2016. These changes were designed to raise the standards expected of pupils by the end of primary school and are measured using a scaled-score system.

Under the previous statutory assessment system prior to 2016, pupils were expected to achieve the standard ‘Level 4 and above’ but there were concerns that this was not a sufficient standard to pave the way for high achievement in secondary education. The new standard is set closer to the old ‘Level 4b’. However, this new post-2016 expected standard is not comparable with that used previously so direct comparisons of levels of achievement between the new and old regimes should be avoided.

Has reading attainment been more adversely affected by the changes?

There has been a shift in the order of how Key Stage 2 pupils are performing in the different subjects. As Figure 1 shows, reading is the lowest area of performance when the subjects are ordered in both 2016 and 2017, yet under the previous regime it was consistently the highest area.

Of course, one of the aims of the new curriculum and assessment regime is to raise standards, so we also checked the relative order of KS2 subjects against the more comparable standards of the previous ‘Level 4b’. As Figure 2 shows, there was a more substantial shift in reading attainment between the previous and current assessment and curriculum systems than there was for other subjects.

Figure 2: KS2 attainment by subject based on pupils achieving the old Level 4b standard

Was this shift towards reading becoming the lowest area of pupil attainment something that teachers were expecting? It would appear not as according to their own teacher assessments, reading was still the subject area which they judged pupils to be strongest. In 2017 teachers assessed 79 per cent of pupils as working at the expected standard in reading, compared with 77 per cent in maths and 76 per cent in writing.

Figure 3: KS1 attainment by subject over time based on pupils achieving the old level 2b standard 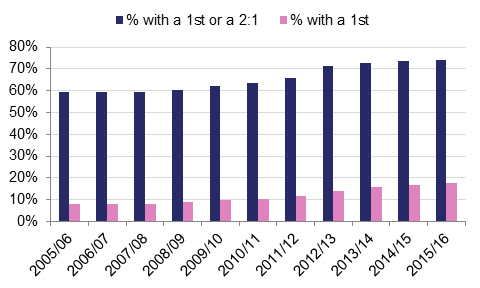 Source: Department for Education National Statistics Key Stage 1, 2012-2016. 2017 data not yet published. Note: The standard applied under the old regime was a Level 2 or above. As the new regime has set a higher standard we have presented the corresponding KS1 results for the higher standard of level 2b

What has caused this change in reading attainment?

We cannot discern a definite answer from the data, but we can speculate as to why the new curriculum and assessment standards appear to be disproportionately affecting pupils’ reading attainment in 2016 and 2017.

Clearly it has proved more difficult for pupils to meet the standards expected in reading. The new statutory reading assessment includes more difficult and challenging questions designed to test the most able pupils and incorporates content similar in demand to a previously separate Level 6 paper. The gender gap has also widened slightly in 2016 and 2017 (to a gap of 8 and 7 percentage points respectively) compared to preceding years (the gap was 4 percentage points). Girls may have coped better than boys with the more challenging texts in the new assessment since, typically, they develop emotional maturity and self-regulation earlier.

Our assessment is that the new reading curriculum has not changed that much in terms of assessable content, whereas the opposite is the case for the other subject areas. During a period of such intensive changes, it is possible that greater priority has been given to getting to grips with the subject areas that have undergone the most curriculum modification; and conversely less priority to reading.

It may also be easier for teachers to gauge the new expected standard requirements for subject areas like mathematics, writing, and grammar, punctuation and spelling (GPS) because the new curriculum is so much more prescriptive and explicit year by year (e.g. use fronted adverbials), whereas reading expectations may be more abstract and continuous (e.g. develop positive attitudes to reading).

Pupils undergoing end of KS2 assessments in 2016 and 2017 may have experienced ‘back filling’ in their latter years of primary school to cover aspects of the new curriculum not previously covered. New requirements for maths and GPS may have been easier to catch-up on in this way, whereas reading is more skills-based and develops with consistent practice and exposure.

The future of children’s reading

It is reasonable to anticipate that we will continue to see an increasing proportion of pupils reaching the expected standard in reading in the future as familiarity with the pitch of the texts and questions is gained. However reading, and the imbued skills of comprehension and interpretation of information, are fundamental abilities for all other learning and for achieving positive future outcomes. It seems important, therefore, to understand more about how reading is being developed within the current curriculum and assessment system in order to ensure that all children leave primary school as capable readers.